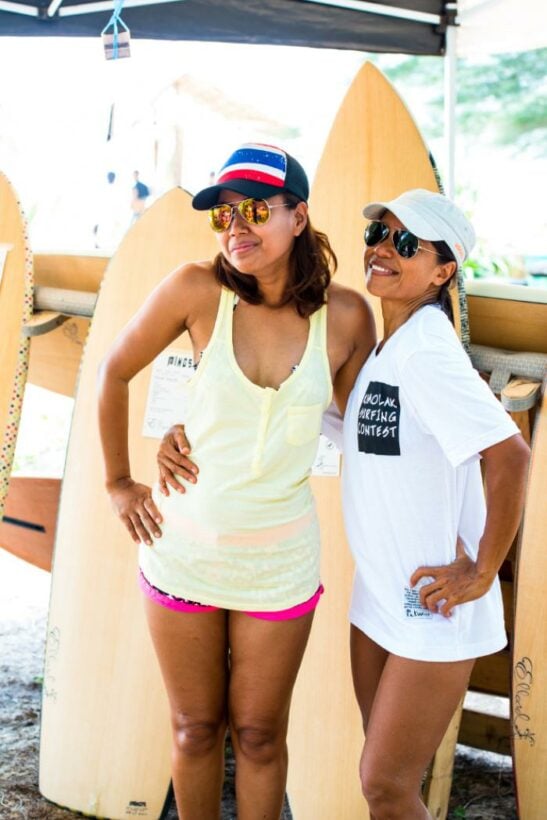 PHUKET: After crossing the bridge off the island, the sense of immediacy, impatience and the hustle and bustle of Phuket fades quickly. The pace of life slows to what is expected of a tropical island.

Dozens of people experienced this as they made their way to Khao Lak for the first annual Khao Lak Surf Competition last weekend. They drove to Khao Lak and passed Nang Thong, Bang Niang, Khuk Khak, and all the way to Pakarang, where they crept along looking for the small dusty sign marking Memories Bar and the surf competition.

After turning left to head due west, they passed some elephants and abandoned rubber plantations on the long and winding dusty road that leads to Pakarang beach. Looking south from the end of the jarring road was an idyllic scene of long flat beaches reaching down into clear blue waters, all of which were almost completely devoid of people. However, looking north, you could see where all of the people were. Surfers congregated between buoys marking the competition zone and Memories Bar and Pakarang Surf Shop were overflowing with water-lovers sprawled about under the protection of any scrap of shade they could find.

Surfboards were everywhere – laying in the sand, standing in racks and hanging all over Memories Bar to make it clear what kind of beach bar you were at. Reggae music set the vibe and contestants gathered around the results board to see if they made it through their last heat to proceed to the next round.

Organized by the owner of Memories Bar and Pakarang Surf Shop, Montree “Ching” Natakuatung, along with help from his long-time friend and local surfer Matt Blauer, the first surf competition to grace the shores of Khao Lak exceeded their expectations with over 100 entries in six divisions.

Although the contest enjoyed sponsorship from many, including Elleciel Custom Surfboards, Saltwater Dreaming, Andaman Sea and Surf, the Kata Krew Firewire, NSP and more, it takes more than sponsorship to have a successful surf comp.

“The thing that you need is the goodwill of people to come up and be a part of it. We went to Phuket and tried to get people excited and it worked,” says Matt of their efforts to spread the word.

As the surf season in Phuket approaches at a seemingly lethargic speed, surfers from Nai Harn to Nai Yang jumped at the chance to head north, where bigger swells were hoped to be found. Sadly, Saturday’s waves were an uninspiring one to two-foot and choppy, leaving surfers struggling to squeeze in any miniscule maneuver before the wave closed out.

Saturday saw round one heats in men’s longboard, open shortboard and women’s division.

The following morning had stoke meters reading high when hungry eyes fell upon glassy two to three foot waves breaking fairly clean at Pakarang. Many families were in attendance as well as local kids taking part in the contest or just hanging out enjoying the friendly scene.

Heats and quarter-finals were held all day, with longboarders squeezing out the longest rides, rushing to the nose to try and get five toes over before the break cut the ride short. Shortboarders were trying to generate enough speed to pull off a maneuver before the section closed-out with reasonable success, this can be attributed to the fact that they normally have to surf with small and sloppy conditions.

Dubwise Phuket was representing with DJ Unity Selekta, who was serving up free-flow reggae and dub for spectators and beach goers, and as a soundtrack for the surfers.

Matt explained that the idea for a competition stemmed from a way to get locals more excited and involved with surfing.

“For me, it’s about the kids; for Ching, it’s about the community – Phuket and the different surfers, everyone coming up and having a good time together. This surf contest is about getting kids stoked because when they see other kids better than them, they want to surf that much more.”

Matt sees surfing as a way to keep local kids involved in positive activities, “Our thing is, give them something clean to do – the surf is here, it’s free.”

The contest was a huge success. The sponsors pulled-through by providing money and prizes, plenty of surfers made it out and the sea cooperated to an extent.

So what’s next? “I think it is inevitable that there will be another contest next year,” exclaims Matt.
“To be honest, we are not looking for bigger sponsors, we are going to keep it kind of home-grown.”