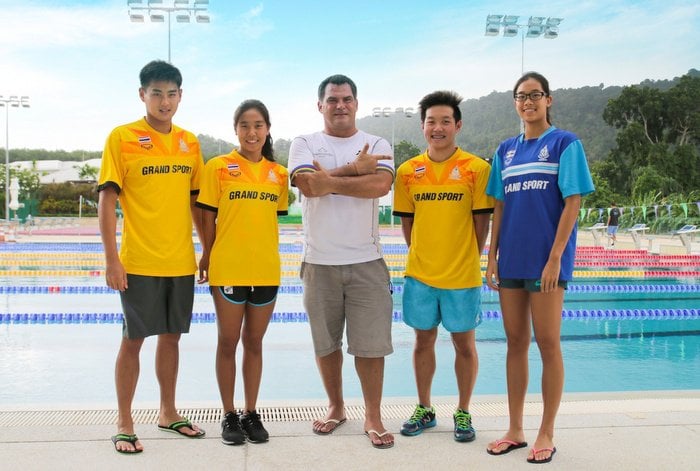 PHUKET: Thanyapura’s top swimming stars are hoping to bring home a bounty of medals when they dive into the pool and compete at the Southeast Asian Games (SEA) next week.

Swimming sensations Peerapat ‘Garfield’ Loessathapornsuk, 18, Patarawadee ‘Ploy’ Kittiya, 21, Kornkanjana ‘Golf’ Sapianchai, 17, and Tanakrit ‘Nok’ Kittiya, 19, will come up against the best in the region at the SEA Games from June 6 to 11.

Between the four of them, they will compete in ten races over a seven-day period, while representing both Thailand and Thanyapura on the international stage.

More than 4,700 athletes from 11 countries will travel to compete at the 28th SEA Games, which are held every two years. Athletes from 35 different sports will participate in the games.

“It’s going to be a very intense week where a lot of exciting things will happen. I expect to come back with a handful of medals. The best outcome would be to return with two individual gold medals, a gold medal for the relay and a couple of bronze medals,” said Miguel Lopez, head of aquatics at Thanyapura.

“I wish our athletes the best of luck at the Southeast Asian Games in Singapore next week. They have all worked very hard to get to this point and I know they will do Thanyapura proud,” added Thanyapura President and Chief Executive Officer Philipp Graf von Hardenberg.

Garfield will be competing in the 1500 freestyle, while Ploy will race in the 100m, 200m butterfly and 4 x 200m freestyle relay. During the week, Ploy can also qualify to compete in an additional race – the 4 x 100m independent medley.

The swimmers also have their eyes on Olympic glory and are hoping to gain qualifying times at the SEA Games. Garfield has received a wildcard to the Olympics from Federation Internationale de Natation (FINA) – the international aquatics governing body – but Ploy and Golf will both have to fight for their places.