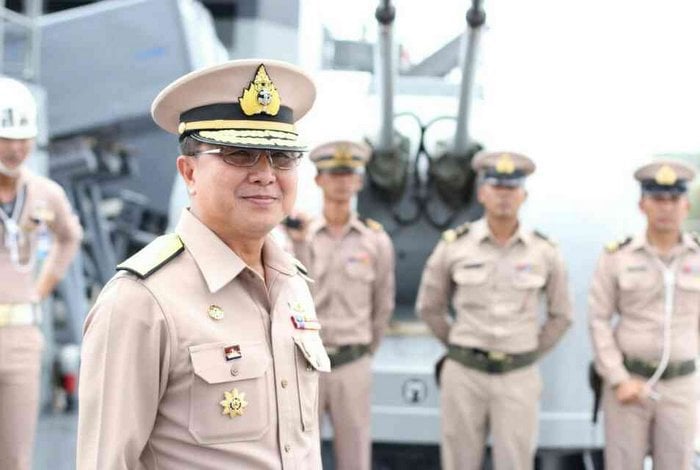 PHUKET: The Royal Thai Navy unveiled a patrolling navy fleet in the Andaman on Tuesday that was given the mission of ‘helping on’ Rohingya and Bengali migrants by providing medical services and translators, as well as food and water supplies.

“More than 600 officers have been assigned to this mission, which will be running seven boats, two airplanes and two helicopters,” said Vice Admiral Sayan Prasongsamrej, commander of the Royal Thai Navy Third Area Command, which is based in Phuket.

“The mission for the next two weeks will be providing aid to migrants passing through Thai waters. We can help, but there is no shelter for them here in Thailand.”

The mission could be extended beyond the two week period, but V/Adm confirmed it would only be done so after he received orders from the government.

“I have already assigned the Navy to take to the border line of the sea and act as a floating naval base,” PM Prayut said.

PM Prayut took a moment in the announcement to stress that Thailand would stick to its ‘help-on’ stance, ensuring that Rohingya or other migrants continued their journey beyond Thai waters to their final destinations – usually cited as Indonesia or Malaysia.

“We agreed to a request by the US [United States] to help by having its planes patrol areas. Any country could do the same as the US, but they have to be under our supervision, because it is our area. They will not independently patrol – they have to work with our task force,” PM Prayut said.

The Prime Minister also lashed out at a CNN news report that claimed that threats of violence and guns were used to force a vessel carrying Rohingya out of Thai waters.

“How can we do that? Thailand has been helping them for a long time according to humanitarian principles. We are Buddhists and consider every life important,” Gen Prayut said.

“In treating the migrants, we did not divide whole families, [to just] the sick ones. We took photos of every step for use as evidence. The media should not make a groundless allegation, as it will tarnish the country’s reputation.”

Suit up for the SEA games