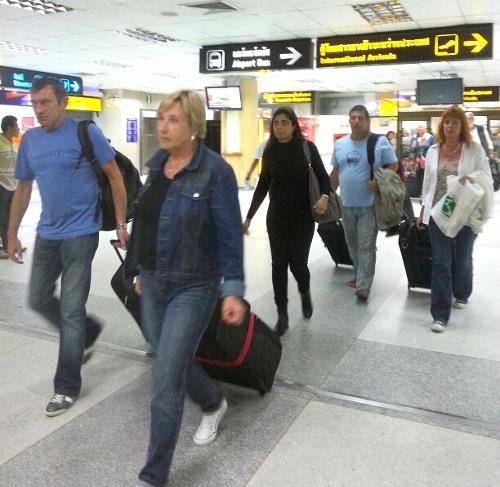 PHUKET: All 249 Air Berlin passengers stranded in Phuket after their plane was forced to make an emergency landing shortly after takeoff last night have been airlifted off the island and are currently en route to their original destination: Abu Dhabi in the United Arab Emirates.

“The plane took off at 11:40am. We also expect a team of Air Berlin aircraft technicians to arrive in Phuket this evening to inspect the faulty engine [that forced the crew to make an emergency landing],” he said.

“All services at the airport are back to normal. All scheduled flights are operating as usual,” he added.

A British couple who were on board the Airbus 300-200 when it made the emergency landing said they were thankful for how the Air Berlin flight crew handled the situation.

Asking not to be identified, the British woman said, “Soon after the plane took off, the captain announced that we had to make an emergency landing, but he did not say what the problem was exactly.

“The crew prepared the passengers with the emergency devices, and as the plane touched down we heard a boom, like an explosion. Some passengers started shouting and asking the crew what had happened.

“At that time, my and I husband were praying for our lives, hoping that nothing bad would happen,” she said.

“The plane continued down the runway a farther and finally stopped. I felt so relieved when I heard the flight attendants telling us to exit the plane,” she added.

The woman explained that Air Berlin had arranged another flight for the passengers.

“Some passengers accepted the new flight, but some changed their plans so they could stay in Thailand a little longer. My husband and I decided to spend a few more days in Bangkok before we board our flight home,” she said.

“We fully understand that this was unpredictable and we are really thankful to the two captains for saving our lives and to the crew for taking good care of us,” she added.

Sydictive Party: One night without Paris