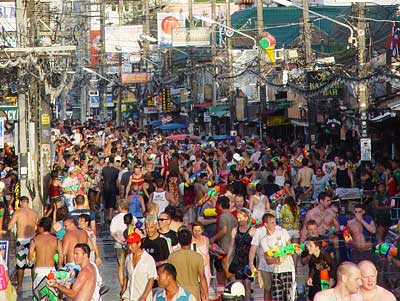 PHUKET: The water-splashing riot of the Songkran Festival draws near and with it the Phuket authorities’ annual road safety clampdown.

Between April 12 and 18 police are promising to strictly enforce Thailand’s often-neglected traffic laws. In particular, officers will be on the lookout for drink driving, speeding and motorcycle riders without helmets.

Twenty-four-hour checkpoints will be erected at the following locations around Phuket:

Police will also check buses to ensure they are safe. They are asking the public to inform them by calling 1548 if bus drivers are drunk, drive too fast or fail to swap drivers after driving long distances.

The plans were announced at a meeting at Phuket Provincial Hall late last month chaired by Vice Governor Smith Palawatwichai and attended by officials from the Department of Disaster Prevention and Mitigation, the Public Health Office, the Land Transport Office and the Phuket Provincial Administration Organization.

V/Gov Smith said 60 were injured and four killed during the Songkran period last year. In Thailand as a whole there were 4,332 injuries and 373 deaths.

“Most of the accidents involve motorcycles ridden by drivers who are drunk and riding too fast,” he said.

“This year we are aiming to reduce the number of accidents and deaths by 5 percent from last year,” he added.

The deputy director of Phuket Public Health Office, Dr Wiwat Seetamanotch, said most of those injured or killed were 15 to 20 year olds. Most accidents happened between 5 and 6pm and around 1am, when most nightclubs shut.

Dr Wiwat said the punishments for drink driving were not harsh enough.

“The punishment should be jail as an example to other drink drivers,” he said.