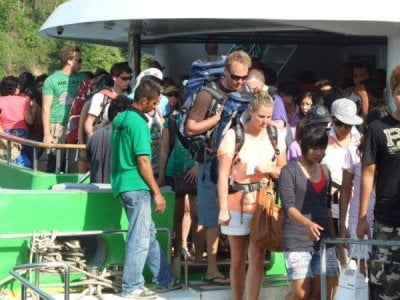 PHUKET: A 20-baht “entrance fee” levied by the local authority in charge of Koh Phi Phi has sparked a row with Phuket tour operators.

On Saturday the Ao Nang Tambon Administration Organization (TAO) began collecting the charge from all visitors to fund the cleaning of the island’s piers.

Tour operators are complaining the TAO did not officially warn them in advance.

Nikorn Tormaitree, a tour operator representative, said operators knew a charge would be introduced but weren’t told when. Some tourists were angered when TAO officials asked for the money, he said.

“The tourists didn’t know why they had to pay more because they thought the fee was already included in the tour cost. Although it’s only 20 baht, the tourists should know in advance because they might refuse to pay and this will cause problems.” he said.

Mr Nikorn said the operators would not resist the charge but asked that the Krabi Governor consider “whether or not it was suitable for tourists”.