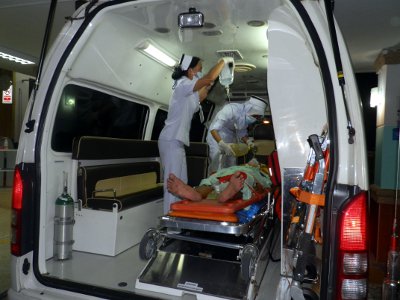 PHUKET: Phuket police are investigating the beating of a man from Songkhla who was set upon by a gang of youths in Cherng Talay last night.

Local police received reports of gunfire and a wounded man outside a row of flats on Pasak Soi 4 in Cherng Talay Village 4 at 10pm.

At the scene they found the victim, 21-year-old Nattaphon Nuanla-ong, with lacerations to the head, a bruise to his right orbital socket and a wound to the base of the skull consistent with being hit with a blunt object.

He was still partially conscious when Cherng Talay Police arrived with Phuket Kusoldharm Foundation rescue workers, who rushed him to Thalang Hospital for emergency treatment.

Mr Nuanla-ong’s condition deteriorated and he lost consciousness, prompting staff to rush him to the better-equipped Vachira Phuket Hospital in Phuket Town.

Mr Nuanla-ong, from Ranode District in Songkhla, was employed as a security guard in the area.

Police questioned his friend, 25-year-old Chaiya Wongsanaow of Loei, who said he had been drinking whisky with Mr Nuanla-ong and another friend for about an hour when Mr Nuanla-ong left on his motorbike, saying he had “personal business” to attend to.

About 15 minutes later, the friend heard the sound of gunfire outside. He called the police emergency number 191, then went to help his friend accompanied by the owner of the four-unit row of flats where they lived, he told police.

As he approached the group they fled the area, he said.

A rescue worker said that from the size and nature of the wounds it appeared that the youths hit Mr Nuanla-ong’s head with both sharp and blunt objects and kicked him in the head when he was down.

The rescue worker said he feared the man may have suffered a brain hemorrhage.

Cristiano Ronaldo: “It is the most difficult group in my opinion