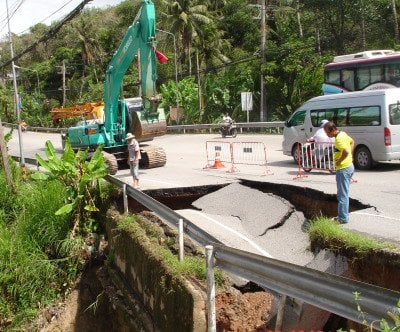 PHUKET: The section of hill road between Patong and Phuket Town that caved in during the heavy rain last week has received makeshift repairs and is now open to traffic, thanks to an emergency injection of cash from the Department of Highways.

The road was reopened after two days of reconstruction, explained Samak Luedwonghad, the director of the Department of Highways Phuket office.

“We received an emergency budget of about 100,000 baht from the Highways Department to fix the road temporarily. We started the repair work on August 22 and the road was reopened to traffic by August 24,” he said.

In making the temporary repairs, workers used rock as a base, as it’s durable and able to support heavy vehicles, Mr Samak explained.

“After that we added sand, crushed rock, crushed rock soil, gravel, laterite [clay-type soil abundant in Phuket] and then concreted over the surface,” he added.

Mr Samak admitted there would still be some road surface erosion during heavy rain, but he believes the surface will last until November, when a more lasting solution is planned.

“We have already applied for a budget of 20 million baht to make permanent repairs that will include installing a retaining wall along the side of the road to keep the earth underneath the tarmac in place,” he explained.

Mr Samak expects the money to be available by November 1 and work on the permanent solution to commence soon after.

“It’s a small but urgent construction project, so it shouldn’t take more than 150 days to complete,” he said.

In the long-term Mr Samak thinks the recurring road collapse problems on Patong Hill will be over once the Patong to Kathu road tunnel is completed.

“The number of cars on this road will decrease, and with it the wear and tear; meaning it can be used longer without repairs. However, the tunnel project hasn’t started yet, so our team still has to maintain the road to keep it in good condition,” he said.

The planned 20mn-baht project to repair the Patong Hill road follows similar repairs costing 5mn baht made just three years ago after a huge sinkhole opened at the same location.

Patong Mayor Pian Keesin, who is running for re-election this weekend, was driving along the road when the sinkhole appeared in 2009. He avoided plunging into the mini-abyss and called officials into action immediately.

Coincidentally, in the run-up to this weekend’s election in Patong, Mayor Pian has championed the Patong Tunnel project, which is expected to cost up to 6 billion baht.

Phuket to get new police chief in latest reshuffle