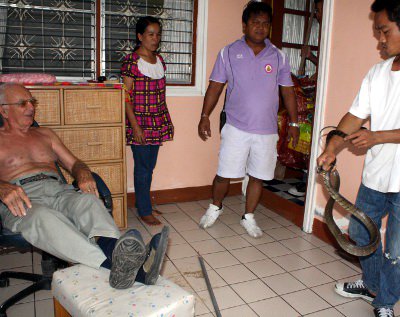 PHUKET: Rescue workers from the Phuket Ruamjai Kupai Foundation yesterday removed a large snake from the home of an elderly Norwegian tourist.

Chalong Police received a report at 11:30am that a large snake had entered the man’s bungalow on Soi Suki in Chalong Village 9.

When workers from the foundation arrived, they found the 78-year-old Norwegian standing inside the dwelling.

After asking him to leave the premises for his own safety, they found the serpent, a large Chinese rat snake, slithering about in a frenzy near a wicker table in the guest room.

The workers used a metal pole to pin down its neck, then grabbed the writhing creature by the back of the head and dropped it into a fertilizer sack.

The snake would be released in a jungle area, they said.

The Norwegian’s maid, Mai Kaew-wilai, said she discovered the snake in the house after returning from practice driving a car.

The Norwegian was trying to catch the snake with his bare hands, she said.

She told him to leave the snake alone as it was large and possibly venomous, then called in the experts.

Sayan Thammaphan, secretary of the Phuket Ruamjai Kupai Foundation, said that while most people knew the foundation was responsible for providing emergency rescue services in the south of the island, many didn’t know that it was initially established to remove snakes from the homes of residents and tourists.

The foundation removes scores of serpents annually, including cobras and pythons, he said.

Anyone who needs assistance in dealing with a snake can call the foundation (076-238364) at any time, day or night, he said.