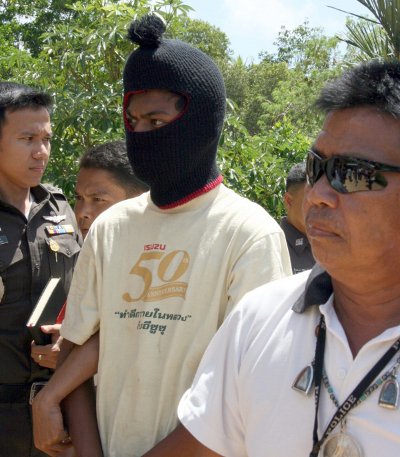 PHUKET: Emotions ran high in Thalang yesterday afternoon as local villagers and relatives of Sunee Premprasert, the maid whose throat was slashed by an intruder on July 22, reacted angrily to the re-enactment of her murder.

Mrs Sunee, 43, was stabbed some 80 times before her throat was slit and she was left to die bleeding on the floor at the home where she worked, said the police report.

The attack was captured on CCTV cameras inside the home, an upscale residence near Sirinat National Park surrounded by cleared land.

The suspect wore a balaclava to hide his face during the reenactment.

He remains unnamed by police as he is just 17 years old, not in his early thirties as initially estimated.

Brought to the scene by Phuket Provincial Police Commander Pekad Tantipong and Tah Chat Chai Police Superintendent Sakchai Limcharoen, the youth was protected from the angry crowd by a squad of officers.

The protection was very much needed. After the re-enactment, officers had to rush the youth into the waiting police car and hold off angry witnesses trying to beat him.

Some climbed up onto the car’s roof and tried to open the doors to get to him.

Present to witness the re-enactment was house owner Khwanjai Aroonjareornkul, 50, who also owns Nanachart Mansion, opposite the Pearl Hotel on Montri Rd in Phuket Town.

The youth, identified as a Thalang resident and a former student at Phuket Technology College, was given the nickname “Phee Dib” (Zombie).

He was arrested on Thursday in Krabi.

After the murder, he fled to his cousin’s house in Tambon Klongphon, in Klong Thom District, the youth told police.

Sai Khao District Police moved in and arrested him at the Klongphon sports field at 5:30pm.

During the re-enactment, he related how the murder unfolded.

He pointed to the bathroom window he scaled at about 5pm that day to gain access to the home, as well as the outdoor kitchen where Sunee was murdered.

He also pointed out some of the CCTV cameras around the house that he had destroyed.

He retraced his steps through the house, showing where he pocketed 500 baht in cash and a mobile phone, the only valuables he could find in the house to steal.

He also explained what motivated the attack. The youth said he drank a few cans of beer before riding past the house. Stopping at the front, he threw a few empty cans at the gate.

Mrs Sunee told him off as he rode away, but her comments angered him into returning and entering the house by climbing over a fence into the maid’s quarters bathroom.

The two argued at the back kitchen for about 20 minutes before Sunee told him to climb back over the fence, even placing a ladder there for him.

That’s when he started stabbing. He stopped only after slicing her throat, he said.

He then spent the next two hours walking around inside the house before Ms Khwanjai returned home.

“He was not afraid of being caught because I arrived home about 8:30pm and he was still inside. I knew something bad had happened, so I drove away from the house and called the police,” Ms Khwanjai said.

The youth is being held in custody at the Phuket Juvenile Observation and Protection Center awaiting trial at the Phuket Provincial Juvenile and Family Court.

The youth’s mother is reportedly a fish vendor at a market in Mai Khao.

His former teachers have said that he was involved with drugs, ya bah (methamphetamine) and kratom leaves in particular.

His urine always tested positive in drug tests at school, they said.

A more detailed story, with an image of the murder suspect captured from Ms Khwanjai’s CCTV footage, appeared on the front page of the Phuket Gazette newspaper dated July 31. Digital subscribers may download a copy here.