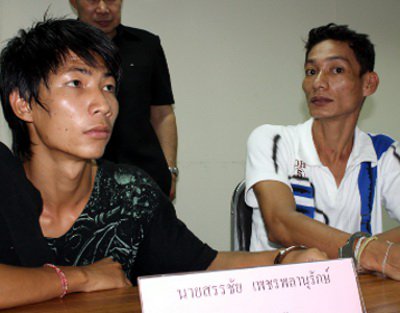 Rawai resident Sanchai “Mack” Phetphlanurak, 21, and Kriangkrai “Krai” Sukprasert, 37, from Nonthaburi, are in police custody and are being charged with possession of a Class 1 narcotic with intent to supply.

Col Wichit said the arrests came after he ordered his officers to cleanse the streets completely of ya bah.

A police officer, posing as a drug addict, arranged to buy 20 ya bah pills from Mr Mack for 6,500 baht at Nai Harn lake in Rawai, he said.

When officers hiding nearby allegedly saw Mr Mack pass the drugs to the undercover officer, they arrested him, seizing the 20 pills as evidence.

Under interrogation Mr Mack was persuaded to reveal that he had bought the drugs from Mr Krai for 300 baht each.

Officers subsequently arrested Mr Krai at a bungalow in Muang District. Police searched his room, allegedly finding a further 230 ya bah pills stashed behind the fridge.

Also seized in the course of the arrests were 7,000 baht, two cellular phones and a Honda Click motorcycle.

Both suspects have confessed to the charges, Col Wichit said.

The arrests have come shortly after Phuket Police Commander Pekad Tantipong warned that drug arrests were on the increase in parts of Phuket, including Chalong.

US Ambassador’s daughter dead in fall