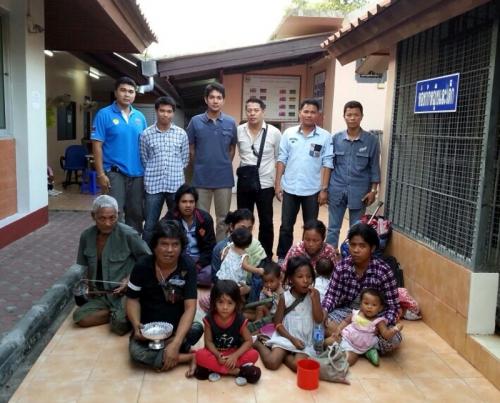 PHUKET: Six children were part of a group of Cambodian beggars rounded up in Patong on Friday, as police continue to crackdown on beggars from abroad (story here).

Police took six children into custody, aged between 5 months and 8 years, in addition to arresting six adults – three men and three women. None of the adults had a passport or work permit, police said.

“There are too many foriegn beggars in Phuket, especially in Patong,” said Phuket Immigration Superintendent Sunchai Chokkajayki.

“I assigned a team to investigate and arrest them,” he added. “They discovered these Cambodian beggars living in a rented house in Patong, so police officers raided the house on March 8.”

Though police caught 12 members of the group, the group’s leader was not found at the house and is being sought by police.

“The group came to Thailand planning to be beggars,” said Col Sunchai. “They illegally crossed into Thailand at Poipet, and took a bus from Sa Kaew,” he said.

An agent was paid 4,000 baht per person, including the children, to bring them to Phuket, Col Sunchai explained.

“They refuse to give any information about the agent,” he added.

Members of the group were charged with illegally entering the country. If they are found guilty, they will be deported.

“Because the children are with their parents, they will be deported with them and will not receive any special treatment from the Social Development and Welfare Phuket office,” Col Sunchai said.

“We also charged the owner of the house with harboring illegal immigrants,” he added.

Tiger Woods: ‘That’s why I work my tail off…’