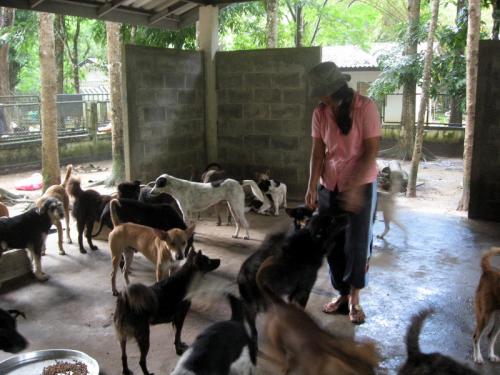 PHUKET: For the past 10 months, Weerasit Puthipairoj, 58, has been the chief of the Phuket Provincial Livestock Office. Originally from Narathiwat, Mr Weerasit has a master’s degree in Agricultural Development from the Prince of Songkla University Haad Yai campus in Songkhla.

Here, he talks about stray dogs in Phuket, the best way to deal with them and what to do if you are attacked by a vicious dog:

There are many stray dogs on Phuket because Thai tradition is to be kind to them and feed them. When you feed them, they stay nearby. The more dogs you feed, the more will come. This creates problems.

One problem with stray dogs is the possibility of disease. Phuket has been rabies-free since 2007. We want to keep it that way.

If you want to help stray dogs, the best thing to do is not feed them. Instead, call us or your local administration organization. We catch stray dogs and bring them to the dog shelter in Thalang, where we take care of them.

We neuter the dogs at the shelter, but we don’t kill them, as this is against our Buddhist beliefs. Right now there are about 400 dogs at the Thalang shelter. They are available for adoption.

We welcome contributions of food for the dogs, but not cash. You can bring us food or just drop off the dog food receipt and we can pick up the food ourselves.

Feeding stray dogs but leaving them on the street is not the best way to help them. One dog foundation in Phuket hires people to feed stray dogs on the street and at local temples. They even sterilize stray dogs – it’s true this can stop some of them from breeding, but the dogs are still living on the street.

We appreciate their efforts, but the best thing is to let us bring the dogs to our shelter.

Another problem with dogs on the street is that they sometimes attack people, but none of the people feeding them is willing to be responsible for them.

There was a legal case once that reached the Supreme Court – someone was attacked by a stray dog that was being fed by someone else. The victim sued the feeder. The judge finally decided that if you feed a dog enough that it doesn’t go away, you are the owner of that dog.

In another case, we once went to pick up a stray dog, and a man claimed to be the owner. I told him that I would take a photo of him and collect his ID information for our records, so that if the dog attacked someone, he would be responsible. Then he denied ownership.

If you have the misfortune to be bitten by a dog, the first thing to do is take care of your wound. Run a lot of water on the wound. Disease comes from the dog’s saliva, so the more you can wash off, the better. Then see a doctor.

If possible, take a photo of the dog that attacked you, then either let the owner know or file a complaint with the police.

If you are attacked by a dog on someone’s property, you can’t really blame the owners, since you were on their property. Compensation will be up to the owners – I’m not sure what legal rights you have.

You do have the right to protect yourself if you’re attacked by a dog, within reason. Again, if you are on someone else’s property, it might be a different story.

For our sakes and for the good of the dogs, let’s all work together to solve the stray dog problem in Phuket.

Phuket Opinion: Get on the bus