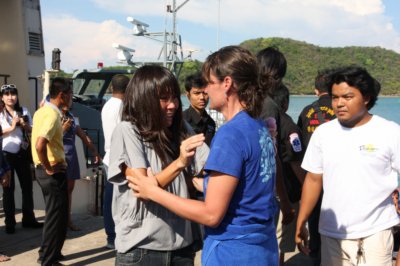 PHUKET: Following the sinking of a boat last night that was carrying tourists returning to Phuket from a diving trip near the Similan islands, six foreign tourists and one Thai member of the boat’s crew are still missing.

Police have issued the following list of seven people who were on the boat but remain unaccounted for:

According to the boat’s captain, Mr Chakri Leechuay, a vortex of “red wind” approached the boat at speed from the North (between land and the boat) and hit the boat on its port side at 11pm. The wind made the boat spin violently, eventually causing it to sink, he said.

Mr Chakri said that weather conditions were calm before the incident. The vortex first appeared on the boat’s radar screen at a distance of three nautical miles but reached the boat just ten minutes later.

Local fishermen helped Marine Police pick up 23 survivors, who were found floating adrift in an inflatable life raft near the site of the incident, at about 2am today. The survivors were taken to the Deep Sea Port at Makham Bay.

The 29.9-meter-long boat, Choke Somboon 19, left Chalong Pier, Phuket, at 7 pm on March 4, bound for the Similan Islands. It was returning to Phuket after leaving the Similan Islands at 6.30pm yesterday (Sunday). It was traveling Southeast at a speed of between 8 and 9 knots and was about 12.6 nautical miles from Patong Beach when it was hit by the freak storm.

The survivors were met by staff from the Department of Disaster Prevention and Mitigation (DDPM) who gave out blankets, water and food. The survivors told the Gazette that they had not eaten since the sinking the night before.

The surviving tourists were questioned and photographed by the DDPM as they came ashore and will be questioned further at a later date. The survivors have been listed as:

Diving instructors who were also on the boat but have since been accounted for are Japanese national Toshihiro Sakai, Swiss national Daniel Brunner and Thai national Pairat Simma.

Mr Chakri said that he had been working as a boat captain for Dive Asia, the tour company that had organized the trip, for about 20 years and that the boat was just six months old. He told the Gazette that he was aware of the possibility of bad weather during the return trip but was confident that the boat was large enough and new enough to withstand an average storm, adding that he has never experienced such freak weather conditions.

A Royal Thai Navy boat and helicopter have also been assisting in the search for survivors since this morning but have been unsuccessful in locating anyone.

A Dive Asia employee told police that the dive company’s insurance policy covers each of the passengers up to 200,000 baht for medical expenses and the same amount in the event of death.