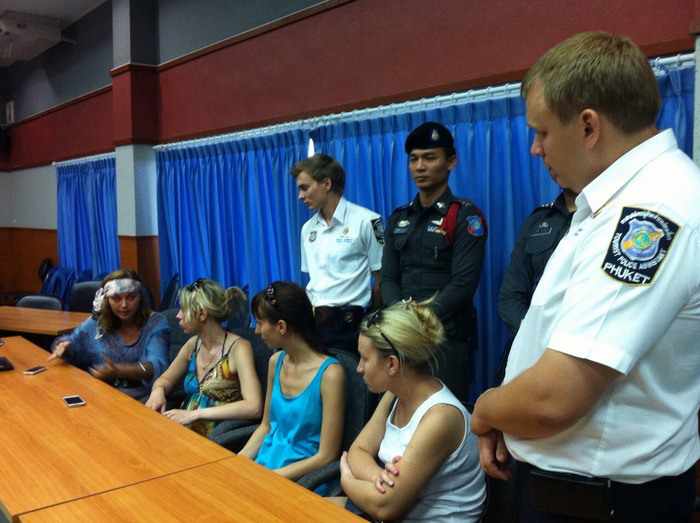 PHUKET: Seven suspects have been arrested and charged with theft and attempted murder for the stabbing of two tourists, one in Kata and one in Karon, early Thursday morning.

Police arrested Ekkawat Ninpoo, 20, at his house on Koh Sireh yesterday. He confessed to the stabbings and accepted charges of theft and attempted murder.

Police withheld the names of the other six already arrested as they are minors.

“We are now searching for the last two suspects, one of which is Witsanu Jindawong, 19,” said Gen Rachatha Yensuang, a deputy national police chief, at a press conference yesterday.

“At about 3am on Thursday, nine suspects on motorbikes arrived at Kata-Karon from Koh Sireh with the intention of robbing tourists,” said Gen Rachatha.

“The group spotted Inna Sifonova, 28, driving a motorbike along the Karon beachfront road with an Italian tourist riding on the back.

“The suspects attacked the tourists and swiped a bag they were carrying. The Italian man fought back, and Mr Ekkawat pulled out a knife and stabbed him twice in the abdomen.”

The suspects left the injured tourists behind and fled with a mobile phone, laptop, HK$6,000, 500 baht and the Italian tourist’s passport.

The gang then separated, and Mr Ekkawat and one other suspect headed to Kata.

“The two targeted three Russian women who were taking photos outside on the Kata beachfront road,” said Gen Rachatha.

“They attempted to steal the women’s mobile phones. Sofya Tolstova, 22, tried to fight them off, but Mr Ekkawat slashed her across her chest before fleeing the scene with the other suspect.”

Both tourists were taken to Vachira Phuket Hospital. Ms Tolstova was later released after receiving minor treatment, but the Italian tourist is still recovering in hospital.

Hospital staff confirmed to the Phuket Gazette this morning that the Italian tourist is not in the intensive care unit and is recovering well.

“He is responsive and speaking,” the staffer told the Gazette.

World Cup: Neymar out of Cup as Brazil and Germany make semis