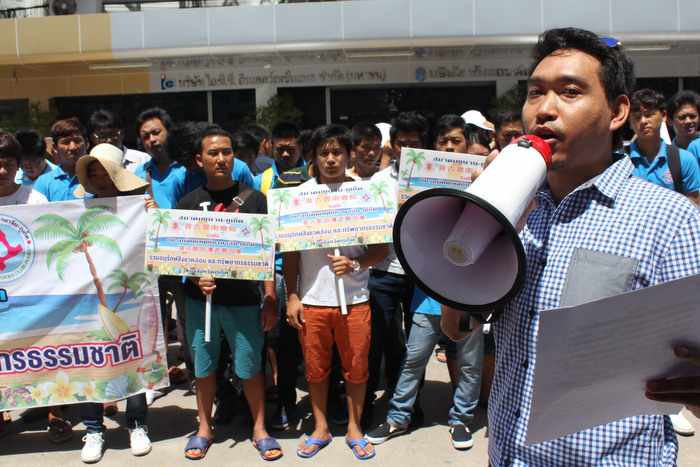 PHUKET: The return of a mob of about 100 Thai-national Chinese tour guides outside the office of a major tour company in Phuket Town yesterday won them a promise that the company will stop hiring Chinese nationals as guides.

Led by fellow tour guide Choochart Rungrattanapaiboon, the protesters massed outside Tranlee Travel Co Ltd, brandishing signs and voicing allegations of Chinese tour guides disrespecting the environment and the history of the island.

“Everyone knows that Khun Jan [Thao Thepkrasattri] and Khun Mook [Thao Srisoonthorn] were sisters who protected Phuket from Burmese invaders, but Chinese guides tell their customers that they were actually a gay couple.”

Mr Choochart argued that the guides were tarnishing Phuket’s good image and environment, and that they were doing a job that is by law reserved for Thai people.

“Tranlee Travel Co Ltd is a big company that could provide many jobs. They should hire us instead of the Chinese,” said Mr Choochart.

“We will be back at the end of the month if they don’t stop hiring Chinese nationals.”

The protesters set a July 30 deadline for the company.

Apichart Chavalpipatpong, manager of Tranlee Travel Co Ltd, came outside to face the mob and confirmed that the company would meet their demands.

“We would like to clarify that there will no longer be Chinese guides working at our company. We fully support all Thai nationals by providing them with jobs during the low season,” said Mr Apichart.

“A lot of Thai guides have applied to work here already. If a vacancy becomes available, we will call these applicants for the job.”

Tranlee Travel Co was targeted by another protest by Thai tour guides in January, when about 100 guides led by Chaifu Saelee, 43, voiced their grievance over the company hiring Chinese nationals as tour guides (story here).