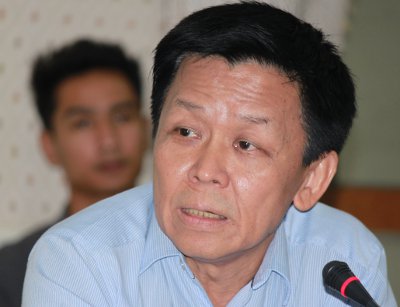 PHUKET: An adviser to the Senate Standing Committee on Tourism has spoken out against the long-standing problem of foreign tour guides operating in Phuket.

Phanomphon Thammachartniyom, an honorary adviser to the upper house committee, told a meeting at Phuket Provincial Hall that he had been working for 10 years to solve the problem of Russians, Chinese and Koreans working as tour guides, but to little avail.

Work as a tour guide in the Kingdom is restricted to Thai nationals by Ministry of Labor regulations; violators are subject to stiff penalties – if they can be caught.

“We have discussed the matter with Russian, Korean and Chinese tour operators, but it seems they don’t want to employ Thai guides. Even though our guides are highly qualified, the operators still say they are not good enough,” Mr Phanomphon said.

Despite his stated confidence in the quality of Thai tour guides, Mr Phanomphon pointed out that tour guide training courses were insufficient in many regards.

“Though Phuket universities have produced more than 300 guides, many courses are only two or three weeks long. Having undergone only two weeks training, many Thais guides are hired only as ‘sitting guides’, while foreign guides actually conduct the tours,” he said.

“Sitting guides” are quite literally guides who just go along for the ride, having little person-to-person contact with tour guests.

Capt Siramate Thanapansiri of the regional Tourist Police headquarters in Phuket Town said that an investigation by that agency failed to find any foreigners working as guides in Phuket.

This was echoed by an official from the Phuket Revenue Office, who despite receiving numerous complaints on the issue, was unable to identify any illegal foreign tour guides.

However, Mr Phanomphon said it was impossible that officials would be unable to find foreign guides – if they were serious about the search.

“If you spend three days at some of the popular tourist venues, such as Wat Chalong and Laem Phromthep, you would find a hundred of them,” he said.

Responding to a request by Phuket Vice Governor Sommai Prijasilpa, Capt Siramate said he would inspect locations where foreign tour guides were allegedly working and report his findings in 30 days.

“We don’t think that enforcement will affect tourism. The law is the law; they must follow it. The important thing is that our officers must not accept money [from tour operators for looking the other way]. This problem would end right away if the appropriate action were taken,” said the legal expert.

“We will put in place short- and long-term measures to solve this issue. In the meantime, we need to invite tour companies from Russia, Korea and China to discussions,” said V/Gov Sommai.

Also at the meeting was Phuket Provincial Employment Office worker Puang Songnam, who reported that some 6,800 foreigners were legally employed in Phuket.

British workers formed the largest group, with 1,095, followed by the Filipinos. Russians accounted for 403 and Koreans 284, employed mainly as executives in tourism-related businesses.