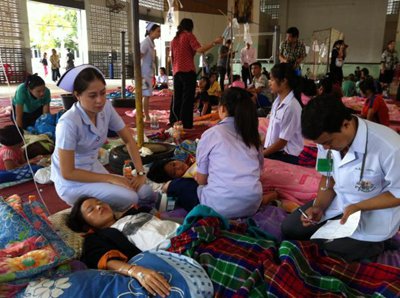 PHUKET: A drug-resistant strain of Salmonella bacteria, found in eggs causing 500 schoolchildren to fall ill, might continue lingering and re-infect them for another three months.

The provincial health office will send a team to tackle the situation and set food-safety measures at all schools in Chiangmai, especially those that take boarders. The authorities insist that Salmonella-infected eggs have not hit the general markets.

After several cases of severe diarrhoea were reported at Suksa Songkhro Chiang Mai School on Monday, more students were admitted at nine hospitals in the province, bringing the number of hospitalised children up to 500 as of yesterday morning. Though 367 were discharged, 127 are still in hospital for septicaemia, which requires the strongest type of antibiotics.

A 17-year-old schoolgirl suffered from shock due to severe septicaemia and low blood pressure.

Chiangmai health official Dr Wattana Kanchanamol said lab tests confirmed that the diarrhoea had been caused by a strain of Salmonella bacteria which is drug resistant because antibiotics had been mixed into chicken feed. The bacteria, living on fowl faeces, contaminated the eggs, he explained.

He estimated that 300 of the 10,000 eggs donated to the school were found to be carrying the bacteria, adding that 26 of the patients have already had a relapse and nine had to be hospitalised.

Dr Wattana said that though the bacteria’s 72-hour incubation period has passed, the children would be carrying the bacteria for another three months; hence they might have a relapse or infect others.

A medical team has interviewed the donor’s family and collected samples of their faeces to see if they might be carrying the bacteria, he said, declining to reveal the donor’s identity on grounds that the donation had been made with good intentions. Meanwhile, livestock officials were dispatched to inspect a chicken farm in Hang Dong district, he added.

Dr Wattana said the donor family had boiled the eggs on Friday and Saturday but instead of refrigerating them, they had stored them on egg trays. On Sunday, they presented the eggs as an offering to the Kruba Sriwichai Monument and later delivered them to schools to serve with dinner the same evening.

Some of the eggs also went to nine agencies and a community, and when a student from the Northern Region School for the Blind became ill after eating an egg, authorities managed to alert the donation receivers to get rid of the eggs.

Saying the outbreak had not affected the markets or the public at large, Dr Wattana urged people to ensure that all eggs are properly cooked before consumption, and that they are always kept refrigerated because Salmonella grows fast in hot weather.