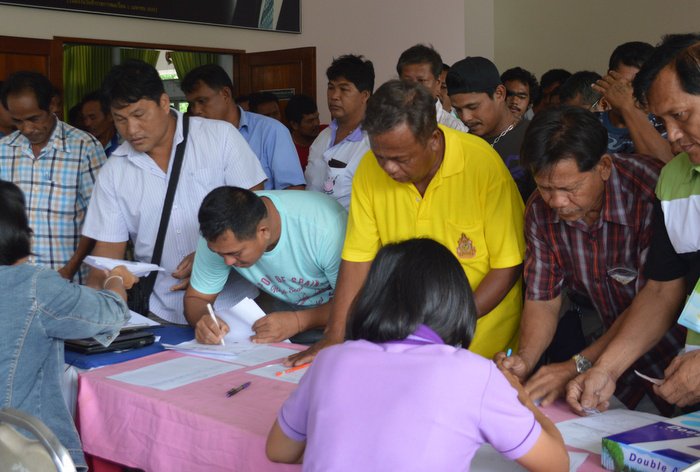 PHUKET: The flood gates opened yesterday as hundreds of employers and migrant workers in the fishing industry queued up at Phuket’s newly-opened one-stop service center designed to get fishing boats and their crews legal.

“I couldn’t believe there were that many people who needed to be taken care of,” said Capt Preecha Tuntiruk of the Third Naval Area Command, who heads Phuket’s Port In-Port Out Center (PIPO).

“This is a very good time to get everything sorted out properly, as fishing boats are unable to go out during the rough weather anyway.”

An order is in place for Phuket and the region forbidding boats smaller than 24 meters from leaving shore, following the sinking of three boats, one of which was a fishing boat (Video Report here).

A ‘yellow card’ issued by the EU in April warned that if Thailand failed to take strong actions against Illegal, Unreported and Unregulated (IUU) fishing practices, there would be severe consequences.

The warning ushered in the strict Port In-Port Out policy, which demands that fishing vessels prove compliance with a number of regulations as they enter and depart ports, with some variation depending on their size.

In response, fishermen claimed that they would prefer to remain ashore rather than be entangled in the strict regulations (story here). However, their request for an extension was promptly denied by Prime Minister Gen Prayut Chan-o-cha.

Local one-stop service centers have been set up in all 22 coastal provinces in Thailand, with an additional 28 centers charged with monitoring inbound and outbound movement of all Thai-registered fishing trawlers, reported The Nation.

“We expect that all the workers and employers will get their documents done. And they can go out to the sea for fishing,” said Interior Ministry permanent secretary Wiboon Sa-nguanpong.

Efforts by the government to expedite and assist the fishermen to become legal were welcomed by Somyos Wongbunyakul, president of the Phuket Fishing Association.

“I attended the meeting held by the Department of Fisheries, Marine Department and National Broadcasting Services of Thailand Office to get a temporary ticket for radio use, before we get the official licence,” Mr Somyos said.

“I was among more than a hundred people at the seminar. The weather is bad, so this is a good time to take care of this – I am thankful the government is lending us a hand.

“We will be doing our best to get all the necessary documents in order, as staying ashore is not beneficial to us at all.”