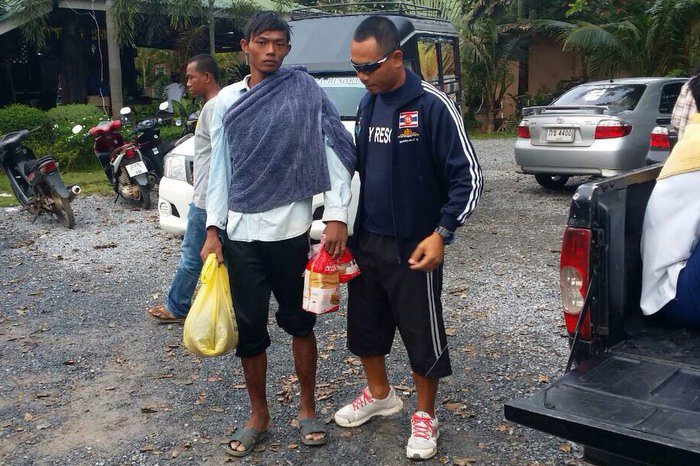 PHUKET: Three crew members of a barge that sank between Koh Racha Yai and Koh Phi Phi on Tuesday were found by locals and rescued from the sea off Koh Lanta yesterday and early this morning.

Krabi Marine Police Chief Anurak Parinyasathiragul confirmed this morning that three people were found alive in the sea off Koh Lanta after having held onto debris for two days.

“Locals first spotted Nathee Klabjit, 23, who was floating in the sea, holding onto a gas tank, near Klong Kong Beach at about 6:30pm yesterday,” said Lt Col Anurak.

The locals brought Mr Nathee to shore, and discovered that he was one of the six people who went missing from the sunken barge.

“This morning, two more of the crew were found at about 5:30am floating in the sea in the same area off Klong Kong Beach. These two men had been holding onto logs,” said Col Anurak. “They were rescued by a Phu Yai Baan [village head] in the Saladan subdistrict of Koh Lanta.”

“All three men have been taken to Koh Lanta Hospital for treatment,” he added.

The rescued men told police that the other three crew were alive when the boat went down, and that they had also been holding onto floating items to survive.

“We believe these people are still alive and, based on the sea currents, are safe on land somewhere in Koh Lanta or floating in the sea close to where the others were found,” said Col Anurak.

Naval officers have now taken to land to search for the missing crew.

“We think they are now on land, but he have yet to find them. When the weather allows, we will resume our search by air,” Capt Puttiporn Sawatsut of the Royal Thai Navy Third Area Command told the Phuket Gazette this morning.