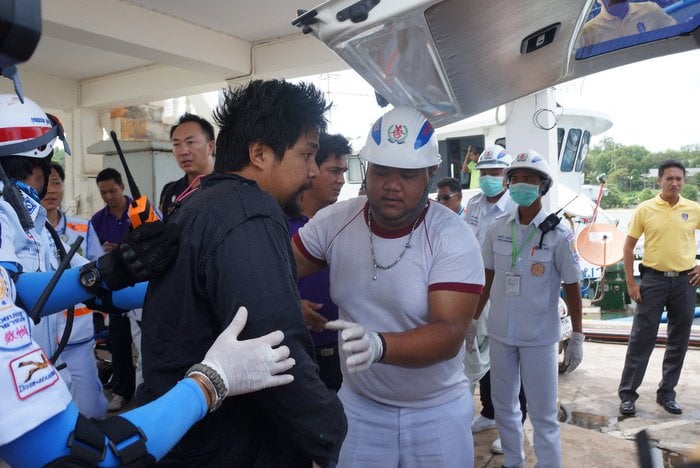 PHUKET: Crew members of the two boats which sank this morning off Koh Racha and Koh Hei (Coral Island) have been safely rescued by Marine Police.

There were six people on the fishing trawler, Nava Yuthakit, which sank at around 8:15am today near Koh Racha while the other boat which sank off Koh Hei, Cambodian-flagged Sinaran Andaman, was carrying 10 people (story here).

At about 1pm this afternoon, a Thai navy helicopter rescued three of the 10 Sinaran Andaman crew while the remaining seven were saved by a Marine Police boat.

“All of them are safe and sound. However, some were exhausted from fighting for their survival in water. They were later taken to Vachira Phuket Hospital,” Phuket Marine Police Deputy Commander Prasert Srikhunrat told the Phuket Gazette.

Of the 10 crew members on the Sinaran Andaman, six are Indonesian and four are from Myanmar.

Col Prasert questioned the boat’s Indonesian captain Selamet Waluyo, 50, who said that the vessel was delivering cargo from Myanmar to Penang, Malaysia, when it was hit by strong waves near Koh Hei. As it moved to rest on one side, it suddenly hit a rock under the water and started to sink.

Although the boat is now under water, its cargo is still floating in the area.

“We have yet to move in on the cargo as the weather is very bad. We have to wait until strong winds subside,” Col Prasert said.

Meanwhile, Mr Selamet has contacted the company in Malaysia to clear the remains.

“I have already called the company so that they can come here and take care of the goods soon,” Mr Selamet told the Gazette today.

“I am glad that all of my crew were safely rescued. We would like to thank all of the officers,” he added.

Only one hour later, the six crew members of Nava Yuthakit were brought ashore by a Navy team.

Officers then questioned the captain Panom Sengjan, 38, who said that his boat had left Koh Racha to collect oil from an oil rig when strong waves hit both sides of the stern 32 kilometers offshore, causing it to sink.

Meanwhile, officers are still looking for the six crew members of Sintu Phuket 1.

“All parties have done their best to help and prevent accidents and will continue doing so. The Marine Office has issued a warning letter to prevent boats from going out. However, local boats and even tour boats just ignored it. The priority is to help each other stay safe rather than focusing on personal profit,” Col Prasert said.­