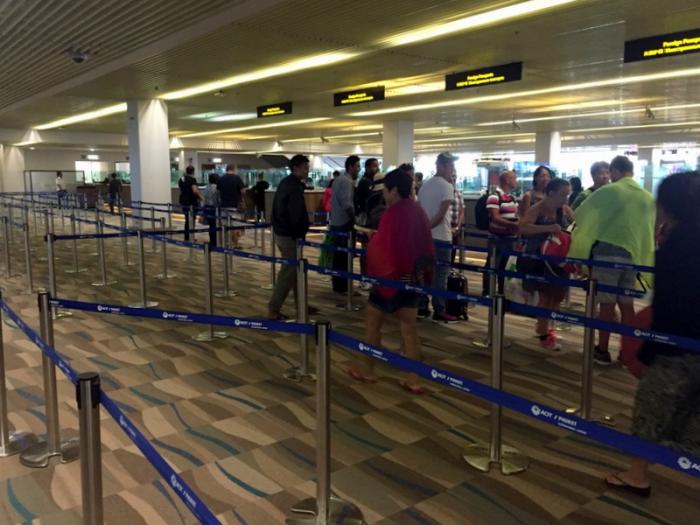 Phuket airport officials admitted the new terminal’s immigration systems are not working, even after test flights from China and the terminal’s official September 16 opening by Thailand’s Prime Minister (story here).

Out of the 34 counters at the immigration departure area, only 13 had computers, the Phuket Airports of Thailand reported.

An airport Immigration officer, who spoke to the Gazette on condition of anonymity, said that three of those computers are reserved for use by VIPs; crew members, Asia-Pacific Economic Cooperation personnel and the disabled.

“The computer and Internet system aren’t stable either,” the official said “That’s caused huge delays in our traveller processing times.”

The official said it would take up to three months until new computers arrived.

“Hopefully, we should be getting about 20 more officers next week,” he said.

Screens detailing departure and arrival information were offline yesterday. Many passengers in the international terminal’s departure section, delayed by long immigration lines, were confused and often receiving no warning of flight gate changes.

The official told the Gazette that immigration at the new terminal is short-staffed.

“We would like to apologize for any inconvenience. We are not ignoring the problems,” he said.

Families to cash in on anti-noise spending