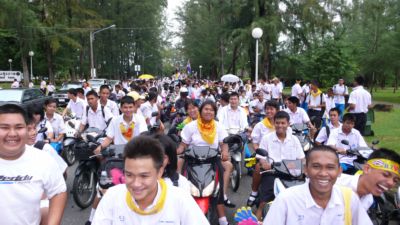 PHUKET CITY: Despite the Constitution Court today ordering Samak Sundaravej to resign his post as prime minister, the People’s Alliance for Democracy (PAD) in Phuket will continue to protest at Saphan Hin to add pressure on the coalition government to step down.

PAD Phuket leader Natjarong Ekpermsup told the Gazette, “The PAD will not leave Saphan Hin. Although Samak and his Cabinet must go, the government is a coalition with many corrupt members. We cannot accept a caretaker Prime Minister from Samak’s coalition; our country needs a neutral person to be PM, someone who can punish all those who have done wrong.

“We will be watching the five PAD leaders on ASTV at Saphan Hin every night for direction. If the rest of the Cabinet must be put under pressure [to resign], then we will help add to that pressure,” he said.

“Banharn Silpa-archa would not be acceptable to us as prime minister because he does not know how to keep his word. He made a lot of promises before joining the coalition; afterward, he did not do anything,” he added.

The local PAD protests have gained mass support from the students on Phuket, with some 3,000 secondary students from Phuket Wittayalai School marching from Provincial Hall to Saphan Hin this morning to show their support for the PAD.

The marchers here today proceeded slowly around Surin Circle and down Phuket Rd to Saphan Hin, where the PAD protesters have returned and set up a stage after their occupation of the grounds of Phuket Provincial Hall last week.

The group was led by about 200 students on motorcycles, most of whom opted not to wear crash helmets.

Unlike many of the older PAD supporters, some of the Phuket Wittayalai School students were able to express their displeasure at the current administration in English. “We are protesting because Samak is selling our country to foreigners,” one schoolgirl said.

The students were polite, drove slowly and rejoiced cheerfully as they expressed their dislike for PM Samak, observers noted.

After arriving at the PAD protest area at Saphan Hin, some of the students took to the stage, marched around with megaphones or made phone calls, successfully urging some 4,000 students from Satree Phuket School to join the protest.

Students from two vocational schools in the city were also mobilized to join the protest.

However, after national media announced the Constitution Court’s decision this afternoon, most of the students disbanded and headed home. “The students at Saphan Hin were so delighted with the news of the court’s unanimous decision on Samak, that they decided to head home,” Mr Natjarong said.

PM Samak forced to step down