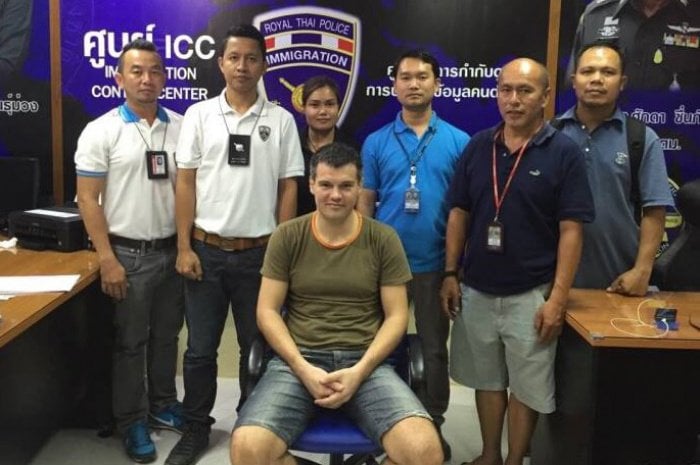 PHUKET: A Russian fugitive hunted by Interpol for alleged fraud totaling 25 million baht was arrested in Rawai on June 10, according to The Nation, citing a press release, on Tuesday.

Dmitrii Rodionov, 38, was brought in to a ‘conference’ in Bangkok along with five other alleged foreign criminals who had been arrested for a variety of different crimes, said Maj Gen Thamrong Saengwattanakul, commander of Immigration Police Division 3.

“On May 19, we received a letter from Immigration Police in Bangkok stating that Mr Rodionov was wanted on an Interpol red notice for a fraud case involving more than 20 million Russian rubles [about 25mn baht],” said Phuket Immigration Police Deputy Superintendent Thawatchai Nongbua.

“The Russian government had already canceled his passport, and he was known to be staying in Phuket.”

Police arrested him at his home in Soi Sammakee in Rawai, said Col Thawatchai.

“His permit to stay had expired on March 11, 2015. We arrested him and charged him with overstaying his visa,” Col Thawatchai noted.

“The other charges, of fraud committed in his home country, are the responsibility of Interpol.”

After he was charged in Phuket, Mr Rodionov was transferred to the Immigration Police Headquarters in Bangkok.

“We are in the process of deporting him,” confirmed Maj Gen Apichat Suriboonya, head of the National Central Bureau of Interpol in Bangkok.

“As he committed the crimes in his own country, he needs to face the punishment and the consequences there.”