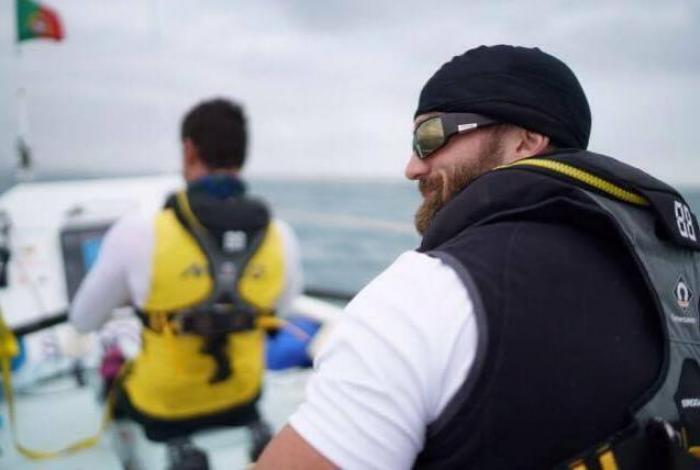 PHUKET: Battered by waves, flying fish and brutal heat, the adventurers of Row2Rio left the African coastline, pulling themselves through the middle of the Atlantic in their pioneer voyage from Portugal to Brazil (story here).

“30 days doing two hours on, two hours off – it sounds ridiculous when I say it,” wrote Luke Richmond, Aussie expat and head coach at Unit27 in Phuket, last week.

“Yesterday was another brutally hot day with minimal wind or current. We took the opportunity at midday to go through much needed maintenance. The bottom of the boat needed a scrape to get off all the barnacles and little organisms that have been hitchhiking with us. It’s surprising how much speed these little critters can steal from you. A check of all nuts and bolts on deck to ensure that everything is functioning properly.”

The team has now covered more than 1,800 nautical miles, putting them far beyond the halfway point in their adventure to honor the Olympics and raise funds for Macmillan Cancer Support. However, the Doldrums dealt out significant mental and physical punishments for the four rowers: Mr Richmond, Susannah Cass, Mel Parker and Jake Heath.

“So a little about rowing in the Doldrums – it is a bit like rowing through treacle just using chopsticks. It was so hard that at points Mel and I would just burst out laughing, because some of the waves and currents almost made it impossible. However, we got through it with a smile on our faces and dosed up on ibuprofen, as it was tough on our backs,” writes Mr Heath.

Mr Richmond also confessed to struggling in the Doldrums.

“Without being able to see the waves, the oars were getting yanked in all directions and my body took a hammering. I get so frustrated at times that I throw the oars down and just sit for a while. After I calm down and see Mel or Sussannah, whoever is on shift with me at that time, still rowing in these ugly conditions, I feel guilty for throwing a little tantrum and take up the oars again. This cycle will repeat itself many times throughout the night,” writes Mr Richmond.

“When conditions are rough, it’s more about survival, first just trying to stay on your seat as you get hit by waves. Then the oars rarely making decent contact, right hand might be good on one stroke and the left hand will be air borne, then the left could get stuck and slam your shin on the next stroke; on the third, you might have good clean contact on both sides.”

Adding to the chaos of the night shift were flying fish, which were just another hazard for the rowers. One reportedly knocked Ms Parker in the head and Mr Richmond was slammed in the back.

“It’s just one more thing to be aware of and makes for an exciting night shift. The girls keep throwing them back no matter how much I insist we should save them for breakfast,” wrote Mr Richmond.

Fatigue has set in and the rowers’ bodies have begun to change, as resources are pulled from unessential muscle groups.

“I have done a body evaluation today – my calves have decided to pack up and go on holiday. I think half of my quads have gone with them. It seems that any muscle tissue that isn’t being used for this specific task has been consumed for energy. I have a beard straight out of Castaway and my hands are so hard and rough, they will make a good fill in for sand paper. Other than that, I’m still smiling and enjoying this crazy challenge. I’ve definitely taken my body to a new level of suffering but it’s adapted well and is now starting to get strong again,” wrote Mr Richmond last week.

Though the heat at the equator is brutal, forcing the entire team to be hyper-aware of signs of heat exhaustion, dehydration and sunburn, the days of the rowers are also filled with unadulterated beauty.

A pod of dolphins teamed up with rowers, keeping them company. Mr Richmond also had the breathtaking experience of seeing a large tuna breach the surface of the endless deep blue world that surrounds them. Even a large shark paid the Row2Rio team a quick visit.

“We are in the middle of one of the most beautiful places on our earth. The sunrises are amazing and the stars fill the sky from horizon to horizon. Every morning, I wake up truly grateful to be part of this crazy adventure,” wrote Mr Richmond.

Overall, spirits are high, with team members guessing on the final number of days it will take to reach Recife, Brazil. Ms Parker, an optimist, says 50 days; Mr Heath thinks it will be closer to 53 days; Mr Richmond went with 54; and Ms Cass reportedly went with 57, to avoid disappointment.

No proof of guns in Naka encroachment case