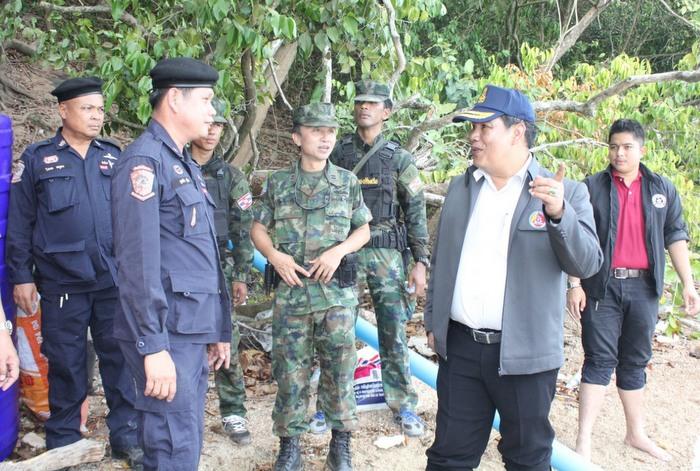 PHUKET: Officials this morning found no evidence to back allegations of gunmen preparing to clear a piece of island forest in a land encroachment case on Naka Noi Island.

“A group of men with guns, claiming to be hired by the land owner, were about to clear the forest, which is home to our precious hornbills. The land itself [sic] is in the process of being revoked, as [it’s documentation] was unlawfully issued. We went to stop them, but they threatened us with guns,” alleged Thai actor Puri Hiranpruk, who originally brought the case to the Department of Special Investigations (DSI) about four years ago.

The case was brought to Phuket Governor Chamroen Tipayapongtada’s attention this week. In response, he dispatched Phuket Vice Governor Chokdee Amornwat this morning to meet with the alleged land owner.

“We saw no signs of the forest having been cleared, nor any gunmen, as alleged,” said Vice Governor Chokdee. “Sayan Sanban, the representative of Six Mountain Co Ltd, which is taking care of the land, denied having hired armed men to intimidate Mr Puri and his family.”

In 2014, SorKor 1 #70 was upgraded to a NorSor3Kor for a plot of land on Naka Noi, explained Lt Col Prawut Wongseenin, director of the DSI’s Bureau of Consumer Protection and Environmental Crime.

On July 30, the same day that the land document was upgraded, it was immediately sold to a private company for more than 42 million baht.

However, the NorSor3Kor that Mr Sayan presented this morning was for a total of 24 rai.

“On April 4, the company went to the Thalang Police Station with the document to inform them that they would start building on their land,” V/Gov Chokdee said. “As they are the legal landowners, until proven otherwise, there is no issue with them developing their property. No court order preventing them from doing so has been issued.”

The decision of whether or not the land document will be revoked is expected to be made on May 6, confirmed the vice governor.