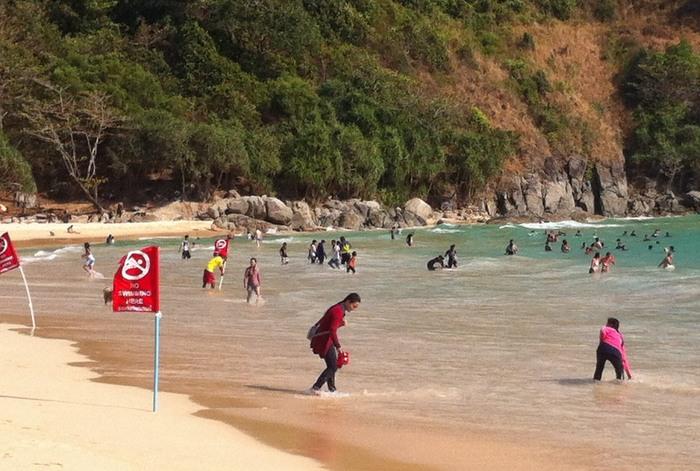 PHUKET: A woman is on life support after being pulled unconscious from the waves of Nai Harn yesterday afternoon.

Vachira Phuket Hospital staff declined to name the woman, who is thought to be in her 20s.

“She was swimming in a red-flag zone with a group of about six other people. In total, there were about 20 Thai people in the zone,” Nai Harn chief lifeguard Jula Nontree told the Phuket Gazette this morning. “We asked them to move several times, but they just ignored us – we rescued so many people caught in rip currents yesterday.”

The woman was in about one meter of water when a wave knocked her and some other people over and started to drag them out to sea.

“We rescued some of them, but we knew one was still missing,” Mr Jula said.

About ten minutes later, lifeguards recovered the unconscious woman from the area she went missing.

The woman’s vital signs have returned, though she is still on life support, Mr Jula confirmed.

“We are working tirelessly to rescue swimmers, but people must take responsibility for their own lives and not swim in red-flag areas,” Mr Jula said.

Algae to blame for murky water in Patong Bay