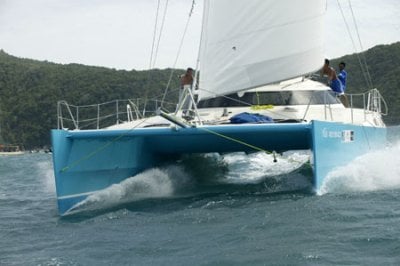 KATA: Yacht owner Chris Sieber is offering a US$5,000 reward for information directly leading to the recovery of his 46-foot catamaran Kilo, which went missing off Kata Beach on December 18.

Mr Sieber told the Gazette this morning that Kilo was last seen anchored offshore from the Kata Beach Resort on December 17, following the King’s Cup Regatta, for which Kilo was chartered.

“At first I thought they [the charter crew] may have taken her for a trip, but the next day we realized that the boat was missing,” Mr Sieber said.

He reported the boat as missing with Chalong Police and with the Marine Police the following day. Authorities in Ranong, Burma and the Andaman & Nicobar Islands have also been notified.

The Marine Police put out a call for all commercial fishing vessels to report any sightings of a boat matching the description of Kilo. However, they did not launch a search, Marine Police Lt Col Pratueng Siramanont told the Gazette today.

Although theft is a possibility, Mr Sieber has not ruled out that Kilo may simply have drifted off her anchor. However, he could not give an estimated search perimeter where the boat, if adrift, might be found.

“If she’s adrift she should be somewhere out between Sumatra and the Andaman & Nicobar Islands, but with the shifting winds as well as the currents, it’s nearly impossible to tell,” he said.

“But if she’s been stolen, she could be anywhere.”

The first search, which took place on December 20, was southwest of Phuket, where Kilo is expected to be if she is adrift. The second search a few days later covered Phang Nga Bay, including Koh Yao Noi and Krabi.

Mr Sieber explained that Kilo had been stripped down for racing in the King’s Cup Regatta. There was very little drinking water and no provisions on board. “And I left only a little diesel,” he said.

Mr Sieber pointed out that Kilo would be easily identified by its distinctive Tim Mumby design. “If it has been stolen, then the thieves are not the brightest. There are only four boats like this in the world. It’s not like it’s a Toyota or a Mitsubishi,” he said.

Anyone with information about Kilo‘s current whereabouts is urged to contact Chris Sieber at Tel: +66-1-8871558 (Thai mobile) or by email at: seabear_1@yahoo.com or chris@katabigrock.net