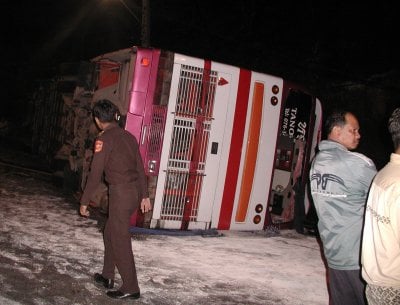 PATONG: A tour bus carrying 37 Israelis overturned on Prabarami Rd in rainy weather about 5 pm yesterday, while it was en route to Patong from Khao Lak in Phang Nga. Two passengers were seriously injured in the crash.

All of the passengers were taken to Patong Hospital to be checked for injuries.

Theerayuth Prasertphol, Chief Technical Officer of the Phuket Provincial Transportation Office, told the Gazette that as the bus was traveling down the two-lane road, which was slippery from a recent downpour at the time, the driver lost control and was forced to turn into the hillside to avoid crossing into oncoming traffic. The bus then rolled onto its side.

Several motorcyclists traveling behind the bus were also reported to have fallen from their vehicles as the bus skewed across the road.

Traffic to and from Patong was blocked for three hours, until about 8 pm, while spilled petrol was cleaned up and a crane was brought to clear the bus from the roadway.

All those injured in the accident are being treated at Patong Hospital, Bangkok Hospital Phuket and Siriroj Hospital.