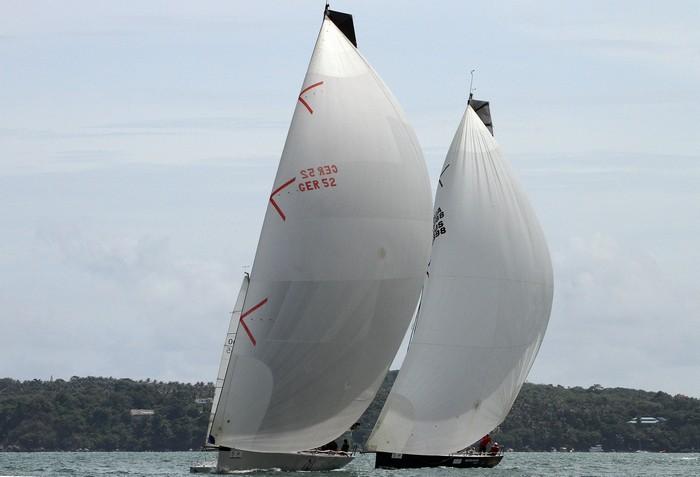 PHUKET: Perseverance and patience were the skills in most demand on Day 1 of the 2016 Cape Panwa Hotel Phuket Raceweek as Principal Race Officer (PRO) Simon James and his on-water team tracked around Chalong Bay and surrounds in search of wind.

Light winds meant a single windward/leeward for all and everybody’s patience paid off as all classes got in a full race put the first scores on the board. Kudos to the PRO and team.

In the Corsair class, made-up of four identical Corsair Pulse 600s, Pixalux, skippered by Mick Tilden, showed the entire fleet a clean pair of heels winning by over six minutes. It was much closer for second and third with the Chinese/Thai team on Phuket Island Radio placing second ahead of Zam Bevan’s team on Multihull Solutions H30 in third.

Nine boats in Multihull Racing made for the joint largest class in the regatta and the first win went to Asia Catamarans Hurricane finishing just 17 seconds ahead of sister-Stealth Cat Java. The larger Stealth, Top Cat, held onto third ahead of the fast finishing Galeforce RAirlines, skippered by Patinyakorn Buranrom.

In the keelboat fleet, the TP52’s of Millenium Racing and Oi! were evenly-matched tracking each other around the course, and it was Ray Roberts and crew on Millenium Racing who took the first win of the series in IRC Racing I.

In what looks poised to be one of the closest classes, David Dimmock’s Swan 42 Loco won the first race in IRC Racing II by a mere nine seconds. Second place went to the Sydney 40 Emagine skippered by Scott Bradley and with a strong team of Thai sailors on board. On his first outing on his new boat, Ben Copley sailed Gust (ex-KukuKERchu) to third ahead of Fujin, the first of the four Beneteau’s that make up the rest of the class.

In spite of the tricky conditions, the racing was close throughout the fleet and no more was this true than in the Cruising/Charter class where five seconds was the winning margin. Venture claimed the win ahead of BeauX Esprits and just over 30 seconds back was the ever-slippery S&S 42 Remington.

Returning to a Phuket regatta for the first time in many years is a one-design Platu class. Referred to as “Absolute One Design”, the five Platus are identical, racing with controlled sails provided by the class organisers and it was Australian Liz Schoch on Phuket Boat Lagoon Fox who put the first win on the board ahead of Clement Lim’s Phuket Boat Lagoon Weasel and Kev Scott’s Absolute One Design, who finished second and third respectively.