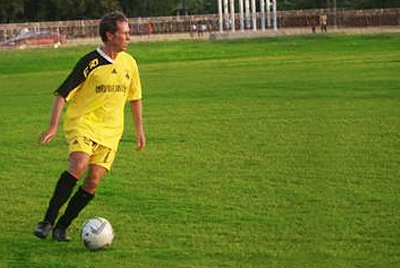 Rassada will now face Kan Eng 2, who defeated Kathu in the first semifinal.

Iszatt, 51, is the only non-Thai playing in the tournament.

The Rassada fullback played a key role in helping his side reach the final, to be played at Surakul Stadium on Mother’s Day, August 12.

The final is likely to start around 4pm, following celebrations in honor of HM Queen Sirikit and the third-place final.

The Rassada Masters Cup is open to players aged 40 and above, with 30,000 baht in prize money awarded to the winning team.

Each team must have a quota of players aged between 45 and 50 and a certain number of players over 50.

Although players are getting slightly long in the tooth in footballing terms, competition remains fierce.

Most of the players have played football at a high standard and what they might lack in speed and fitness, they make up for in skill and experience.

In the opening match, Kan Eng 2 defeated Kathu 1-0 to book their place in the final.

In the second semi, Srisoonthorn faced Rassada and it was Iszatt, one of two Rassada players over the age of 50, who opened the scoring with a spectacular long-range goal.

Bursting forward from right back, he slammed home a swerving shot from 30 yards, leaving the Srisoonthorn goalkeeper grasping at thin air.

Rassada scored another four goals, securing their place in the final with a comfortable 5-0 win.

With just one game remaining, Iszatt is confident of victory.

“We’re the best team and we should win it,” he said. “You used to have to live in the municipality you played for, but they opened it up and now they take players from all over the place.

“The standard of football is high. We had a guy playing for us who had played for Thailand. People were coming up to him and asking him for his autograph before the games,” he said.

Lucky license plates up for auction