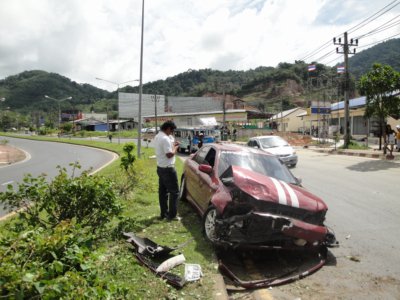 PHUKET: The erratic behavior of a mystery motorcyclist was the reason the driver of a souped-up Ford Sierra gave for wrecking his car, flattening vegetation and slamming into a pick-up truck in Phuket yesterday.

The sporty-looking Sierra spun across two lanes on the road to Patong Hill, slid across the central reservation, collided with an expat-owned pick-up truck heading in the opposite direction and ended up on the other side of the dual carriageway.

“A motorbike suddenly appeared out of nowhere. I tried to do the right thing and swerved to avoid it,” the unnamed Sierra driver said.

The accident occurred a few hundred meters from the police checkpoint near Patong Hill. The Phuket-registered pick-up truck was being driven by its expat owner.

“I can’t believe it. My truck is only six months old,” said the expat.

Both vehicles had to be towed away.

No injuries were sustained in the accident, apart from some bruising to the Sierra driver’s pride, who said the mystery motorcyclist was last seen heading over the hill.