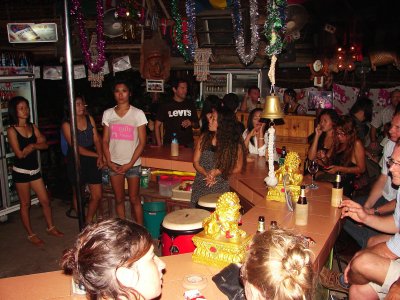 The crackdown is part of an island-wide effort ordered by the Interior Ministry.

It follows the December 27 signing of a Memorandum of Understanding (MoU) by Deputy Interior Minister Thavorn Senniam and the operators of nightspots in Phuket, who agreed to strictly enforce six regulations.

Under the terms of the MoU, all nightspots must be legally licensed, prohibit entry to anyone under 20 years of age, observe designated closing times and prohibit drugs, weapons and lewd performances anywhere on their premises.

Together with 25 members of the Phuket Provincial Volunteer Security Force, Group Chief Wigrom set out from Chalong Circle in search of violators at 1:30am.

After a quick stop at a karaoke bar near the circle, they then proceeded south.

When their 45-minute tour was over, they had the managers of five popular Rawai night venues in custody.

The suspects were the managers of the Freedom Bar, Nikita’s Restaurant, Sunshine Bar, and Jasmine Bar Asia Bar, as well as the proprietor of the Buppha Karaoke.

All were taken to Chalong Police statuin to be charged with staying open late and the illegal sale of alcohol.

The manager of the Buppha Karaoke was also charged for operating without a license.

Noticeably closed when the team arrived were the popular Laguna and Icon bars, two venues that the Phuket Provincial Office has received repeated complaints about from local residents about noise and failure to observe closing times.

Despite the seriousness of the situation and the commando-style garb worn by the volunteers, the mood was relaxed during the raids.

Patrons continued to enjoy their drinks even as the venue owners were being escorted off, in some cases with smiles on their faces.

“Entertainment venues without special licenses can remain open till midnight. Bars, restaurants and karaoke clubs must close at 1am. Nightclubs can stay open until 2 am.

“If any operators are caught still breaking the law, they will have to pay a court fine for the first infraction,” Gov Tri said.

Violators are subject to fines for the first two infractions and closure for an “unlimited” time for a third offense.

Gov Tri said there were 313 legally licensed entertainment venues on Phuket, but that the actual number of nightspots on the island was over 1,000.

Regarding a request to allow nightlife venues in Patong to trade legally until 5am, Gov Tri said he had already passed the request along to the Interior Ministry – but had yet to receive a reply.

Get ready for the weekend in Phuket