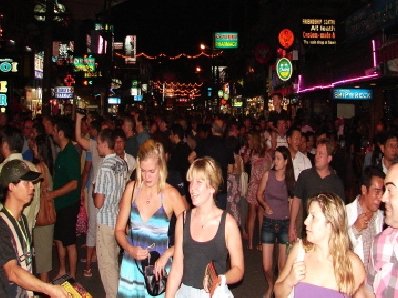 PHUKET: Following reports of a 23-year-old British woman being gang raped near Patong, police are urging young women to exercise caution while on holiday in Phuket.

Patong Police Superintendent Arayapan Pukbuakhao today told the Phuket Gazette, “It is hard to prevent this kind of situation from happening. Sometimes tourists let their guard down to strangers. Tourists should be careful and be alert wherever they go,” he said.

“If it does happen, the first thing people should do is report it to the police. Otherwise, it is impossible for us investigate or arrest the culprits. If the victims report such attacks to us quickly, we can at least try to help them,” he said.

The plea comes after the UK’s Daily Mail reported the alleged gang rape of a 23-year-old British woman for more than two hours in a room near Patong.

The leading UK daily said the woman returned to a room near Patong Beach with a Swedish man for a party, but once she was inside the room she discovered five other men already there, including three Thais.

During the ordeal, the men called the woman’s mother and threatened to rape her daughter again if she did not send them money.

“She was raped and then one of them demanded her mother’s phone number. There was laughter as one of the gang members told her mother that unless she sent money, her daughter would be raped again,” a friend of the victim was quoted as saying.

“Afterwards she went to find the Embassy official. I don’t think she could even remember her attackers. I guess she was drunk,” the friend added.

The woman had overstayed her visa and was working illegally in timeshare sales, the Daily Mail reported.

“It is understood that embassy officials arranged for her medical examination, but afterwards decided it would be hopeless to attempt a prosecution,” said the report.

The woman has since left Thailand, it added.

In August last year, honorary consuls on the island called for Phuket police to establish an anti-rape unit to investigate such reports and provide support for victims.

“We are having difficulty finding female officers especially to investigate sex assault cases. We are looking for them now,” he said.

“We have a few female officers in Phuket, but none of them are investigators. We have to wait for them to be assigned from Bangkok,” he added.