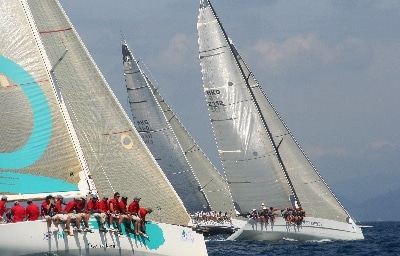 KATA: Ray Roberts’ Quantum Racing crew scored two wins and a third place in today’s racing, moving them into first place overall in the Racing class of the King’s Cup Regatta being held off Kata Beach.

After three races, Phuket-based sailor Scott Duncanson and his crew on Raimon Land The Heights has moved into the lead in the Sports boat class, relegating Japan’s Kenchi Takahashi on Motor Net to second place.

Matt Allen on Ichi Ban maintains his clear lead in the IRC 1 class after winning three from three races.

Peter Dyer’s Sea Property leads the fast Firefly catamaran class, which has provided a spectacle for other sailors in the regatta as the sleek vessels sped with plumes of spray around the courses over the past two days of racing.

Second in the Firefly class on Seahorse Interiors-Mamba is Henry Kaye, who has sailed in all 22 King’s Cup Regattas so far, followed by Hans Rahmann’s Voodoo Child.

Conditions out on the water were calmer than yesterday, when jarring 20-plus-knot winds gusted over choppy seas. This morning saw the fleet start with with gentler breezes of 10-15 knots and much smaller waves.