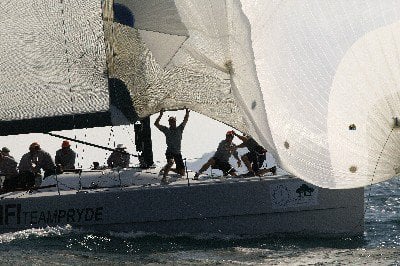 KATA: Proving that this year’s 22nd King’s Cup Regatta competition is tighter than ever, today saw the third leader in as many days of racing.

Neil Pryde and his crew on Hi Fi scored a first place in the Racing class as the fleet swept around the southern end of Phuket, powered by strong and steady headwinds in the morning. These tapered off to feather-light zephyrs for the downwind leg this afternoon.

Winkelman and Dodd’s Island Fling finished second today to hold on to second place overall in the class, while Frank Pong’s Jelik finished third to slip down to third place overall.

Ray Roberts’ Quantum Racing has seen better days on the bay. After an outstanding performance yesterday, his crew scored a fourth place, which saw them move down to fourth place overall in the class.

Scott Duncanson and his crew on Raimon Land The Heights have a two-point lead over Japan’s Kenchi Takahashi and crew on Motor Net in the Sports boat class. With three races to go, Duncanson has so far scored three first places in four races in the class.

In the Firefly 850 class, Peter Dyer on SEA Property finished third today to secure a two-point lead over Hans Rahmann on Voodoo Child.

Henry Kaye on Seahorse Interiors – Mamba is third place overall in the class, while Brent Gribble from New Zealand today enjoyed his first victory in this year’s King’s Cup on Twin Sharks.

Racing will start late tomorrow, after 9:30 am, after the fleet performs a spectacular “sail-past salute” off Kata Beach in honor of His Majesty Bhumibol Adulyadej’s 81st birthday.