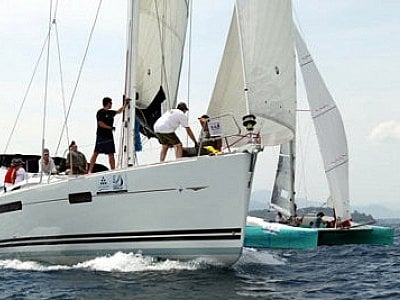 PHUKET: Neil Pryde and his Team Premier crew today extended their lead in the Racing class of this year’s Phuket Raceweek regatta with two wins from two races.

David Ross of KukuKERChu is in second place with 12 points and Rick Pointon’s Jing Jing remains in third place with 13 points.

A storm is brewing in the race for first place overall in the one-design Firefly 850 class. Team Land & Houses and Voodoo both lead the class with six points, followed by John Newnham on Twin Sharks on 14 points.

In the Multihull class, however, the battle is being fought for second place.

Da Vinci, with Paul Larsen at the helm, leads the class with six points, while Alan Carwardine’s Sidewinder and David Liddell on Miss Saigon both have 11 points each.