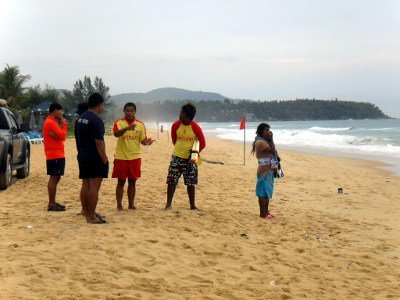 “We tried to resume the search this morning but weather was so rough we had to delay the search until this afternoon,” he said.

“However, we had to call off the search at 5pm because the weather was deteriorating,” he added.

Mr Lin disappeared in rough surf at Karon Beach at about 6pm yesterday while swimming with his parents and girlfriend.

He and his family apparently ignored red flags and entered the dangerous surf, with strong waves reportedly reaching several meters in height.

A search was launched after Mr Lin’s family realized that their son had not resurfaced.

That search lasted only one hour until foul weather forced officials to wait until this morning.