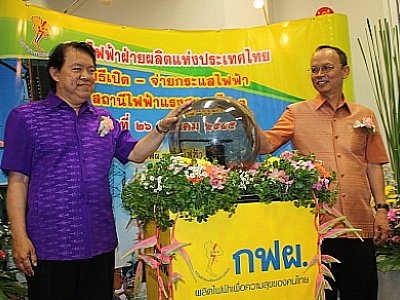 The station opened by the Electricity Generating Authority of Thailand (EGAT) is looking to almost double the megawatts the Phuket power system is currently handling, EGAT director Sutad Pattamasiriwat announced.

“The main objective is to enhance the electrical transfer capacity from the fuel-oil power generating plant in Nua Klong, Krabi, to Phuket in order to meet the increased demand on the island,” said Mr Sutad.

“That power facility will be able to handle 600 megawatts (MW). Currently, the limit in Phuket is 350 MW,” he added.

“EGAT used to supply electricity to Phuket from Phang Nga via 98km of 115kV cable. That voltage is not enough to provide a stable electricity supply in Phuket and Phang Nga, hence the frequent blackouts,” he said.

Though the new transformers are expected help meet the increased electricity-supply demands of Phuket and to significantly reduce the frequency of blackouts on the island, a third high-voltage transformer station is already in the works.

The third station in Phuket will cost less than 500 million baht to build, and when completed should keep up with Phuket’s demand for electricity for about five to 10 years, Mr Sutad explained.

“EGAT plans to continually develop the high-voltage electricity system in Phuket. Our next plan is to connect the 500kV electricity supply from Surat Thani to Phuket. After that, blackouts in Phuket should be a thing of the past as the system we’ll be using will be of a really high standard,” he added.