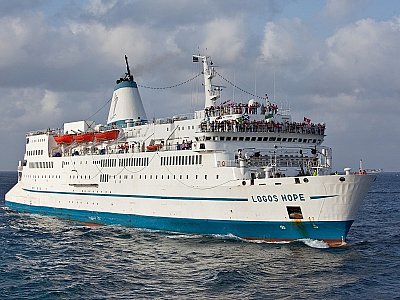 PHUKET: THE MV Logos Hope, the 132-meter ship that is home to the world’s largest floating library, has canceled its scheduled stop in Phuket.

The ship was to drop anchor at Phuket Deep Sea Port from August 17 to 28.

However, it will now depart its current port of Visakhapatnam, India, on August 13 and set sail directly for Penang, Malaysia, bypassing Phuket altogether.

Thai volunteer Yuttakorn “Jimmy” Kriengparinyakij told the Phuket Gazette that the ship’s engine is experiencing “a technical problem” and that the captain decided to head directly to Malaysia to have the engine repaired while maintaining the ship’s scheduled visits there.

“All the ship’s crew are very sorry to cancel the trip to Phuket. We hope to come back soon, maybe next year,” he said.

The Logos Hope will visit Penang and Port Klang before heading to Kuching and Kota Kinabalu on Borneo.

Project Manager Heverton Muniz denied that there were any factors other than mechanical problems involved in the cancellation of Phuket as a port of call.

“It is just one of our generators; we have been having some technical difficulties so we cannot come to Phuket now. We have to go to a place where we can fix this problem,” Mr Muniz said.

Phuket’s ‘Road to Rawai’ to be divided