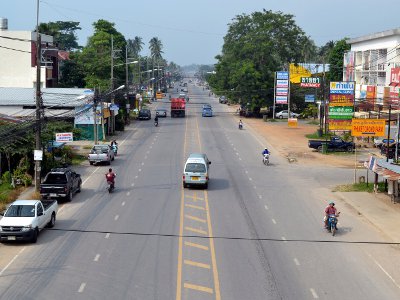 PHUKET: The Land Transport Office has announced that placement of a median strip through the full length of Wiset Road, from Chalong Circle to Rawai Beach, will begin this month.

The road will have at least five U-turn breaks.

The project is part of a government strategy to decrease fatal accidents. The plan was announced by the Phuket Provincial Land Transport Office Chief, Teerayut Prasertpol, on Monday.

“Our target is to reduce traffic fatalities [on this road] to zero,” Teerayut Prasertpol said.

“When the project is finished, there might [still] be some accidents but they won’t be fatal,” he added.

Mr Teerayut went on to explain that the initial plan – designed by the Highways Department regional office in Surat Thani – incorporated four U-turns.

“However, locals were not comfortable with that plan, and after consideration we added an extra U-turn,” he said.

“In addition to the median and U-turns, local police will create special zones alongside the road for hawkers to sell their products to motorists,” he said.

Mr Teerayut explained that by doing so, the police hope to make the road more orderly.

The news follows an announcement in May that Wiset Rd was Phuket’s choice for the nationwide White Road Project, an initiative in which every province chose one road on which to increase safety awareness with active participation from local residents.

“We chose Wiset Rd because it is a straight-yet-sloped road where a lot of serious accidents occur due to fast driving,” he explained.