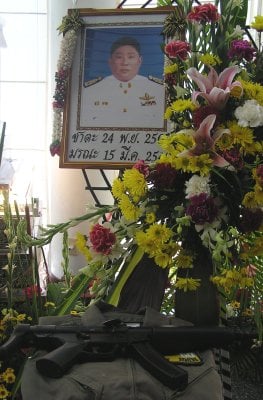 K. Preecha, 43, was shot twice in the head while driving home along Wiset Rd late on Tuesday night. (Sea earlier story here.) He was rushed to Phuket International Hospital, but died there from his injuries.

“We believe that the motive for the killing was a business conflict,” he added.

K. Preecha’s body is currently lying at the family home in the Fisherman Way housing estate, which K. Preecha owned. About 1,000 people had already visited the home to express their condolences to the family, K. Preecha’s mother told the Gazette today.

The cremation ceremony will take place at Wat Chalong on Monday.