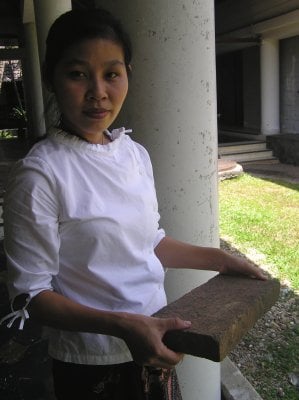 THALANG: Researchers say bricks and earthenware pots uncovered by construction work in Tambon Ban Don confirm the area was the site of an Ayudhya-period settlement, Phuket’s largest at the time, more than 200 years ago.

Ten funerary pots filled with human bones, along with numerous bricks, were unearthed by a team of builders led by Prayun Na-udomon on March 13, when his crew were digging a drainage ditch at the home of a foreigner.

The find was reported to Thalang National Museum the same day by Village 4 Headman Somsak Promchai.

Arnat Bamrungwong, head of the Fine Arts Department Region 15 office in Phuket, said an initial inspection of the pots had determined that they constituted “a very important historical find”, confirming that the Ban Don area was settled during the Ayudhya period.

The site is about two kilometers from where Phuket’s two heroines, Thao Thepkrasattri and Thao Srisoonthorn, repelled an attack by Burmese marauders in 1785, he added.

The pots were taken to the museum for further examination.

Thalang National Museum Curator Thanikan Worathammanon said a temporary halt to work at the site had been ordered. A team of archaeologists will excavate the site further on March 28 to try to uncover more artifacts, she said.