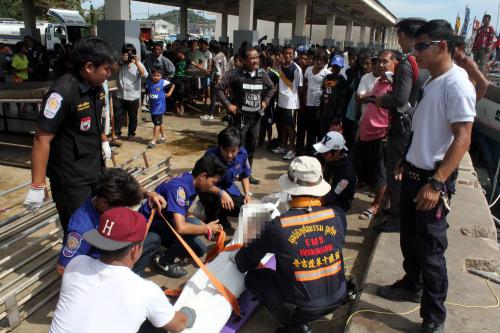 PHUKET: Police are investigating the cause of death of a Myanmar national whose body was found floating in the water off Rassada yesterday afternoon.

Bystanders told police that the man, who police did not name, had been drinking on a boat with friends on Thursday night when he walked to the back to relieve himself, said Somchai Nhuboon of Phuket City Police.

“We were told that he fell off the boat, hit his face while falling and then disappeared into the water,” said Captain Somchai. “His friends looked for him, but couldn’t find him.”

When police examined the body they discovered that the man’s nose had been broken.

“It looked like he had been hit in the face with a hard object,” Capt Somchai said.

“We are going to talk to his friends and clarify what happened to determine the cause of death,” he said.