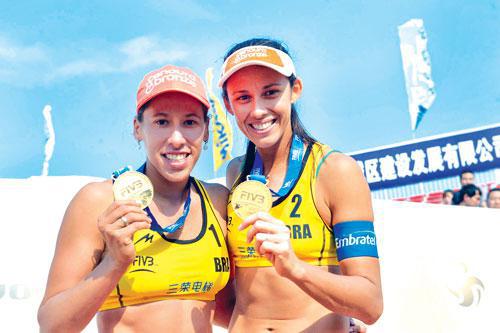 Italy has two teams and the remaining direct acceptances are made up of one team apiece from Argentina, China, Czech Republic, Finland, Kazakhstan, Lithuania, Netherlands, Poland, Russia and Spain.

The Phuket Thailand Open powered by PTT is the biggest annual beach sporting event in Southeast Asia and will be staged on Karon beach, Phuket from October 29 to November 3. Qualification for the final eight places in the main draw will be held on Tuesday October 29, with the main draw starting on October 30 with two days of pool play, before changing to a single elimination format for the latter stages of the event.

Thailand as the host nation has two direct acceptances; world ranked no 40 Radarong and Udom- chavee and world ranked no 69 Numwong and Hongpak. In addition the
veteran pairing of Tenpaksee and Phokongploy have been given a wild card into the main draw.

Admission to the tournament is free and a large sponsor zone on-site with activities and games will further enhance the spectator experience. For beach volleyball fans who are unable to travel to Phuket, SMM TV will telecast “live” matches involving the Thai teams from the opening day of the main draw, whilst the semifinals on Saturday, November 2 and the finals on Sunday, November 3 will be televised in Thailand on NBT and T-Sports.

The Olympic Council of Asia (OCA) gave approval to adding five more sports to the 4th Asian Beach Games, which will be hosted on Karon and Patong beaches in Phuket from November 14 to 21, 2014.

At a recent press conference to announce a test preparation event, which will be held in Phuket from November 8 to December 1, 2013, Phuket Governor Maitree Inthusut encouraged Phuket residents to take part in the event.

“The confirmation of readiness will be announced three months before the [2014] event starts. This lead-up time will be a good chance for more than 360,000 Phuketians to create some income,” Gov Maitree said.