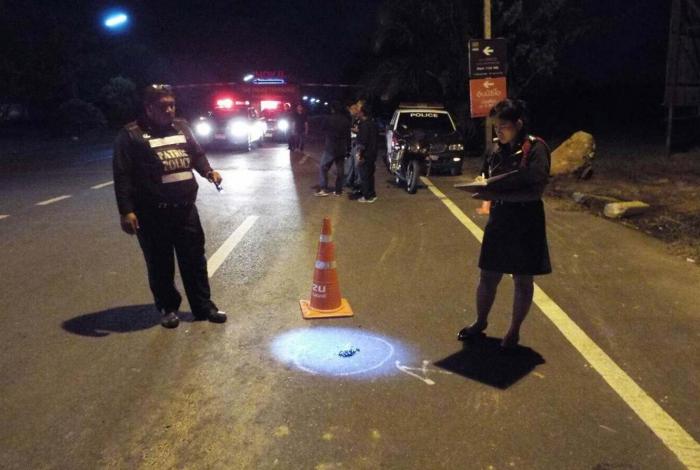 PHUKET: The hunt is on for a man who shot dead the son of a Patong Police officer near the British International School (BISP) in Koh Kaew last night.

“The victim, Thanapol Choosawat, 21, had already been taken to Mission Hospital and pronounced dead by the time we arrived,” said Maj Nattaya. “The scene was littered with remnants of a car’s side mirror, one Buddha amulet and two amulet cases. No bullet casings were found at the scene.”

Police later learned that the victim was the son of Sen Sgt Maj Sawai Choosawat of Patong Police.

Police questioned the victim’s 21-year-old friend, Yuranan Jitjaroen, who was present when the shooting occurred.

“According to Mr Yuranan, Mr Thanapol had made an appointment with someone about a 500-baht (US$ 14.00) payment, and they had agreed to meet near the school. He says a white Toyota Vios with the licence plate number 1500 arrived at the scene and parked near the motorbike.”

Mr Thanapol reportedly went over to talk to the driver but they began arguing.

“Mr Yuranan claims that the driver shot Mr Thanapol once in the chest and shot again at the the pair as the fled, but that the second shot hit the car’s side mirror instead. The Vios driver then reportedly escaped via Soi Hanfarang.

“We are collecting more evidence to figure out the real cause of the altercation, as we cannot entirely believe Mr Yuranan’s story on face value. It seems one-sided,” said Maj Nattaya on behalf of the police.

“Police stations on the island have been notified of the car’s licence plate number so that the shooter cannot flee the province. At this stage, we have identified the shooter and are searching for him,” he added.

Promthep Cape lights up in memory of His Majesty