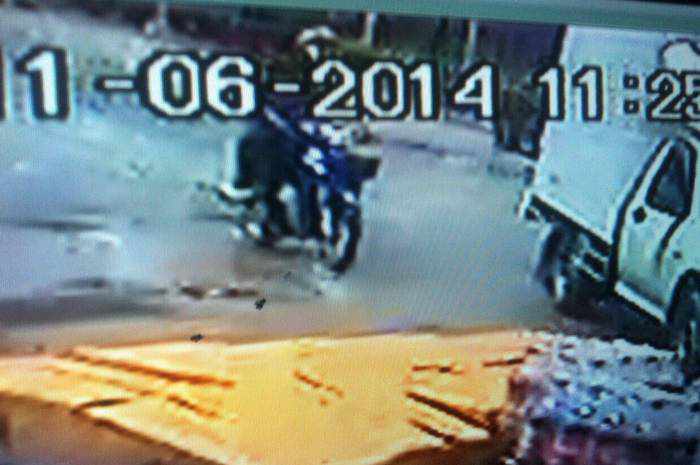 PHUKET: Phuket Provincial Police are now involved in the hunt for two men on a motorbike who robbed gas station staffers at gunpoint and made off with nearly 1 million baht on June 11.

The person riding pillion on the motorbike pulled out a gun and demanded money from the staffers transporting it from the Shell gas station on Phra Phuket Keaw Road to the Tesco Lotus shopping mall on the bypass road (story here).

“Investigators from the Phuket Provincial Police are joining us in the investigation,” said Phuket City Police Superintendent Sermphan Sirikong.

“We have also sent out an alert to all police stations in Phuket to keep an eye out for the suspects and to provide us with any information they may have.”

After further questioning of the robbed staffers, police no longer believe that the suspects were operating an inside job (story here), Col Sermphan told the Phuket Gazette this morning.

“The staffers said that they saw the suspects’ faces and did not recognize them,” he said.

Three days ago, the police received a tip-off that the pair had been found, but the claim turned out to be false, said Col Sermphan.

However, he remains confident that the true suspects are still on the island and that his officers will apprehend them.

“We are confident that our evidence, witness statements and CCTV footage will lead us to the suspects. Although we know it will be difficult, we will not abandon the case,” he said.

“We have follow-up meetings about the case every day. Please give us time to track down the men. We believe we will find them soon.”