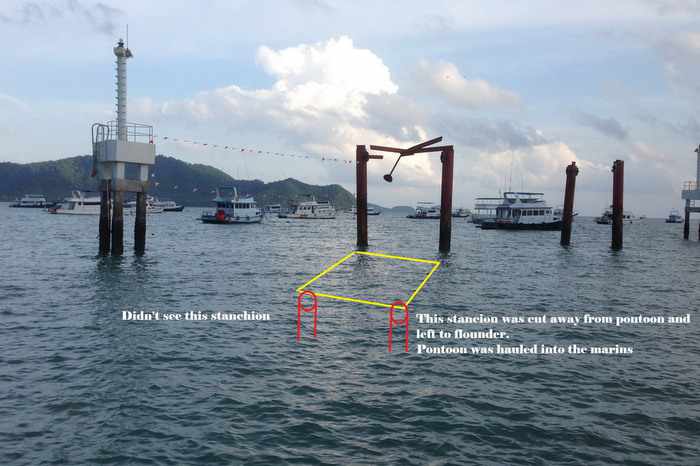 PHUKET: Officials have posted a line of small red and white flags to mark a large metal pillar that lies submerged near Chalong Pier and is a possible danger to passing boats.

The pillar, called a stanchion, had been attached to a pontoon and was part of the Chalong Marina still under construction.

“The pillar broke during last weekend’s storm,” said Sakorn Pukham of the Phuket Marine Office, “so we removed the pontoon and took it to shore.”

The pillar remains underwater and Mr Sakorn is unsure when it will be removed.

“We have contracted with a company to build a new seawall, and they will retrieve the pillar before they begin working and replace it once they’ve finished the seawall,” he said.

The company plans to begin work after they complete a project in Trang, but has not supplied a start date.

“We hung red and white flags to warn boats to avoid the area. It is the best we can do at this stage,” he added.

The seawall, which aims to protect yachts in the marina, is part of a major, long-awaited overhaul at Chalong Pier. The project includes the one-stop yacht center and a 15-million-baht GPS registration system which was launched earlier this year, though the marina was originally slated for completion in 2012 (story here).