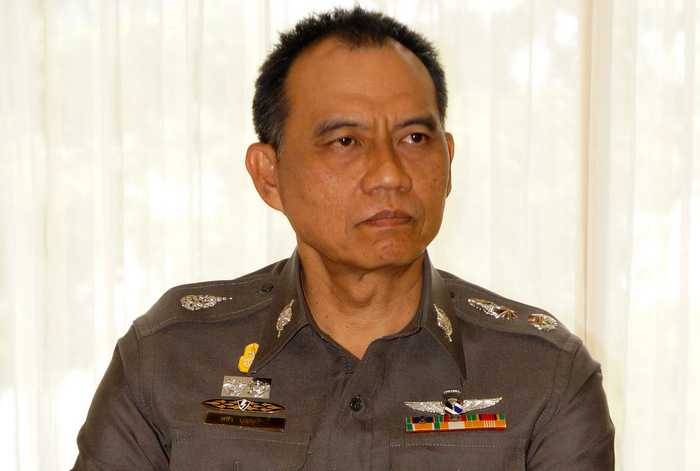 PHUKET: Police have identified the killer who gunned down a man in rush-hour traffic yesterday, firing several bullets into his victim before casually mounting his motorbike and riding away.

“We have established the identity of the suspect and will seek a warrant for his arrest today,” Phuket Provincial Police Commander Patchara Boonyasit told the Phuket Gazette this morning.

The suspect was named as Suwat Sae-jong, 62.

“He is known as a competent marksmen and he often practiced at shooting ranges in Phuket,” Maj Gen Patchara said.

“He shot the victim four times; one bullet hit right between the victim’s eyes. The weapon used was a Glock 9mm handgun.”

The victim, Chaliaw Piyapanikul, 47, was with his 11-year-old son and had just dismounted from his motorbike at the Wor Kor Intersection, near Phuket Rajabhat University, when the killer struck (story here).

“The victim was also a motorcycle taxi driver at the bus station. He was a former Muay Thai boxer who often fought with other motorbike taxi drivers,” Gen Patchara said.

Mr Chaliaw’s son told police that his father had picked him up from their home in Rassada and was rushing to work when the altercation with Mr Suwat began, Gen Patchara explained.

“He said his father was trying to overtake Suwat, but Suwat wouldn’t let him. So Mr Chaliaw beeped his horn. It was like this for quite a few meters before they both stopped at lights to fight,” said Gen Patchara.

“We checked Suwat’s home, but he has fled,” he added. “However, we know where he is and we expect to take him into custody soon.”