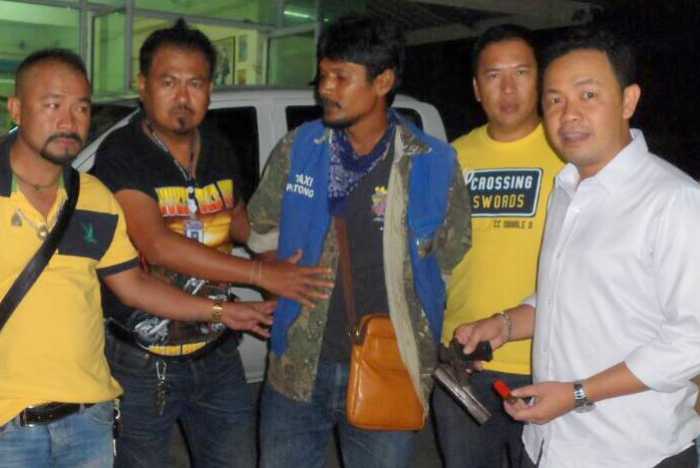 At a press conference yesterday, Maj Gen Patchara presented the two kratom dealers, their illegal firearms and more than 10 kilograms of the narcotic kratom leaves.

Patong Police Inspector Sutthichai Tianpho explained that his officers arrested Prasit Punjapon, 34, from Phuket, on Sirirat Road at about 8pm on Tuesday.

“We received a tip-off that a motorbike taxi driver was sitting by the side of the road with a gun. We sent a team of officers, but he started walking away when he saw our officers approaching,” he said.

The officers chased down Mr Prasit and found he was carrying a homemade handgun loaded with one shotgun cartridge. He had two other cartridges on him.

During questioning, Mr Prasit told officers that he was carrying the weapon as he intended to shoot his kratom supplier, 30-year-old Phuket native Sompop Nuanjan, over a drug deal that went wrong.

“We had Mr Prasit call Mr Sompop to arrange a deal, with officers pretending to be the buyers,” Lt Col Sutthichai explained.

Officers arrested Mr Sompop at the rendezvous on Prabaramee Road on Wednesday night.

“Ours officers found he was carrying a bag of kratom, and he confessed that he had more stashed at his house,” Col Sutthichai said.

Officers quickly raided Mr Sompop’s home in Golden View Village in Kathu, where they seized 10kg of kratom and a handgun with 35 rounds of ammunition.

“We were afraid that the kratom would be moved if we were slow,” Col Sutthichai noted.

Mr Sompop confessed that he sold kratom as a dealer, said Col Sutthichai.

Mr Prasit was charged with possession of an illegal firearm and carrying a gun in a public area.

“Patong Police did well in this case, and prevented another shooting from happening,” he said.